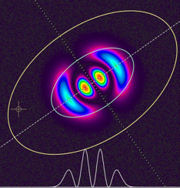 Users of beam profile analysis systems increasingly require packages that can be scaled to include additional cameras in multi-user environments, and that can feed data into user-defined routines to perform specific processing requirements. The BeamGage profiling system developed by Ophir-Spiricon has been built to suit this market, and to provide a new approach to profiling analysis.

"BeamGage is the result of lessons learned from several predecessor systems," Bill Owens of Ophir-Spiricon told optics.org. "The constant need to interface new camera technology with different types of analysis tools helped us to realize that analyzers and sources must be able to evolve independent of one another, on top of a solid video transport backbone."

The design philosophy behind BeamGage was based on several breakthroughs, according to Owens. "The first was recognizing the need for a beam analysis system that was self validating," he said. "The system would validate against theoretical beams and adhere tightly to the ISO specification."

Other key factors included treating data from different sources, such as cameras, files and synthetic beams, in a symmetric fashion, and hence computing results on theoretical beams and real beams in the exactly same way.

"BeamGage is the first fully scalable beam analysis system, and the first system to implement true multi-client functionality," said Owens. "Any number of cameras can be viewed, analyzed and controlled from any number of networked machines, simultaneously. Multi-machine multi-camera users have not been addressed by previous beam analysis systems, but BeamGage allows them to throw enough hardware at a problem to get the job done."

In addition to multiple cameras, the design of the system allows new analysis applications to be added on top of the existing video backbone, and any new cameras added to the system will immediately be available to all analyzers built on that backbone. This should lower the development and maintenance costs of analyzers and cameras, and open the door for further innovation on the analysis side of that backbone.

This combination could provide a solution to users whose applications fall outside of the typical beam analysis domain.