A European telecoms network has become the first to use quantum cryptography to securely transmit information. Nadya Anscombe finds out about the enabling technology and the next generation of equipment under development.

The idea of using quantum cryptography as a method of super-secure communication has been promised for many years. Laboratory set-ups have shown that it is possible; the laws of quantum physics tell us it is possible; point-to-point links have been demonstrated; but the engineering of a network has been a challenge. 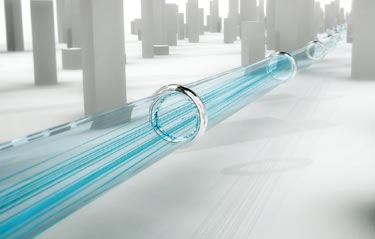 A computer simulation of a quantum cryptography network

It has taken a team of 41 organizations from 12 European countries four years to do it, but finally, at the end of last year, the transmission of data secured by quantum cryptography within a commercial tele-communications network was demonstrated for the first time.

The network, which is based in Vienna, Austria, was developed under the integrated EU project "Development of a Global Network for Secure Communication Based on Quantum Cryptography" (SECOQC). It incorporates optical fibre links as long as 82 km and even a free-space optical link, all using unbreakable encryption based on quantum cryptography.

QKD technology uses individual photons, or qubits, over optical fibre, free space or even satellite links. The technology relies on quantum mechanics, which tells us that it is not possible to observe a quantum object without modifying it. This means that a potential eavesdropper cannot gain any information on this key irrespective of his resources. Any attempt to eavesdrop will generate an error rate that can be identified by the legitimate users.

The Vienna network consists of six nodes and eight intermediary links with distances between 6 and 82 km. There are seven links utilizing commercial standard telecommunication optical fibres and one free-space link along a line of sight between two telescopes. The links employ six different quantum cryptographic technologies for key generation, which are integrated into the network over standardized interfaces.

"The network integrates several different technologies for QKD, each with its own particular advantages," said Andrew Shields, whose team from Toshiba's Cambridge Research Lab in the UK developed the hardware for the Vienna network. "Those using weak laser pulses work best today, while nascent technologies using single or entangled photons will be more important in the future."

The hardware is installed in a standard optical fibre communication network provided by SECOQC partners, Siemens AG Österreich in Vienna. Five sites of Siemens are connected to the network.

Increasing the throughput
Previous developments in quantum cryptography focused on point-to-point connections between only one sender and one receiver, and commercial solutions are already available from several companies (including the SECOQC partner id Quantique of Switzerland). Although these solutions are suitable for some applications such as connecting two data centres in a metropolitan area, they cannot address all scen-arios requiring secure communication. 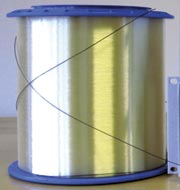 In a network, longer distances can be bridged and alternative paths between sender and receiver can automatically be chosen in order to increase key generation throughput or prevent denial-of-service attacks even if a communication line is interrupted. Furthermore, in a network, more than two partners can simultaneously obtain keys for encrypting confidential communication.

However, while the deployment of the Vienna network represents a big step forward in realizing commercially viable QKD networks, it does have one drawback: it can currently only be used by eight users simultaneously. This is because of the rate at which the quantum keys can be generated.

Up until now, the real-world use of QKD has been held back by its relatively low bit rate (typically less than 10 kbit/s for a 20 km fibre link) making it generally only suitable for secure point-to-point links. Shields' team has already developed the next-generation devices, which increase the bit rate of QKD more than a hundred fold.

"Our devices have secure bit rates exceeding 1 Mbit/s for the first time, thus allowing ultrasecure networks with thousands of users," said Shields. He believes that this could be integrated into the Vienna network within two years. The advance stems from a single photon detector developed by Toshiba, which can work over 100 times faster than the conventional device.

The Toshiba QKD system uses a one-way architecture and the decoy protocol, which has been proven to satisfy unconditional secrecy, meaning that the security does not rely on assumptions about the technology available to an eavesdropper. This is the most stringent security criterion.

"The problem in present systems is that some of these avalanche electrons can be trapped in the device and later stimulate a second spurious detection count," explained Shields. "As these noise counts cause errors in the key, current detectors must be operated with long dead times to allow the decay of any trapped electrons. This limits the clock rate of current QKD systems to around 10 MHz and thus the secure key bit rate to under 10 kbit/s for a 20 km fibre."

The Toshiba team has now devised a method to detect much weaker electron avalanches. This strongly reduces the chance for an electron to be trapped, allowing the detector to be operated at much faster rates. Using this method, Toshiba has increased the clock rate of its QKD system to 1.036 GHz, approaching the value used in conventional optical communications. "This allows a raw bit rate of 9 Mbit/s over 20 km of fibre, which in turn provides 1.02 Mbit/s of secure key – the first secure bit rate exceeding 1 Mbit/s," commented Shields.

The new system also displays record bit rates for longer optical fibre lengths. For a 100 km fibre the secure bit rate is 10.1 kbit/s. This is over an order of magnitude higher than previously reported values.

The new device has another advantage: as well as detecting photons, it can count them. Although conventional devices respond to one or more photons, they cannot resolve the number of photons in the incident pulse or in a short time interval. "We have shown that, contrary to current belief, avalanche photodiodes are capable of detecting photon number," said Shields. "The output signal from our avalanche photodiode is proportional to the number of photons in the incident pulse because we measure very weak avalanches at the early stage of their development."

Shields believes that because his group's device is compact, mass-manufactured, operates without cryogens and at telecom wavelengths, it offers a practical solution for photon number detection and low-cost QKD systems. 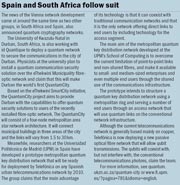 "While the new design is a significant improvement over the old technology, there are still more improvements that could be made," he said. "We now face some considerable engineering challenges to make the new design commercially viable. We first have to make a complete and compact system that is stable and works continuously at high bit rates and can create keys in real time."

This is a challenge because the encoding method involves an interferometer that becomes unstable with time and the system will have to actively compensate for this. However, he is confident that the new technology could be implemented in the Vienna network within two years, opening up the network to thousands of users.

In the meantime, the SECOQC partners are working on another aspect of the project: defining standards and protocols for QKD networks within the framework of the European Telecommunications Standards Institute. "Standard interfaces are needed to allow system integrators, as well as component and hardware vendors, to develop products using QKD," said Shields.

• This article originally appeared in the January 2009 issue of Optics & Laser Europe magazine.