'Science holds the key to our survival' says incoming US president. 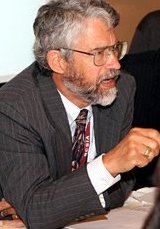 A month before he is sworn in as President of the United States, Barack Obama announced that he will nominate the physicist and environmentalist John Holdren as his presidential science adviser and director of the White House Office of Science and Technology Policy (OSTP).

The early announcement of the nomination contrasts with the 10 months that President George W. Bush took after his inauguration to nominate his science adviser, John Marburger. And both the speed of selection and the choice itself illustrate the incoming administration’s intention to focus on science, particularly as it relates to climate change and other environmental issues. “Today, more than ever before, science holds the key to our survival as a planet and our security and prosperity as a nation,” Obama said in a radio address on 20 December. “It’s time we once again put science at the top of our agenda and worked to restore America’s place as the world leader in science and technology.”

Holdren, 64, has a variety of positions at Harvard University. He is professor of environmental policy and director of the programme in science, technology, and public policy at the university’s Kennedy School of Government. He is also director of the Woods Hole Research Center, an ecological think tank on Cape Cod, Massachusetts.

Holdren earned a Ph.D. from Stanford University, where he specialized in fluid dynamics and theoretical plasma physics. He has been a professor of energy and resources at the University of California, Berkeley and a consultant in magnetic fusion energy for the Lawrence Livermore National Laboratory. He has been associated with Woods Hole since 1992, and joined the Harvard faculty in 1996.

Holdren has already served in government, having spent seven years as a member of President Clinton’s Council of Advisers on Science and Technology, leading studies on protecting nuclear materials from theft, research on fusion, and American R&D on energy. At the same time, he chaired the National Academy of Sciences’ Committee on International Security and Arms Control. He was also active in the Pugwash Conference, chairing its executive committee. In recent years, he has been identified most for his unambiguous views on climate change and related environmental issues. He has referred to global warming as “global climate disruption.” And Nobel laureate Steven Chu, nominated by Obama as Energy Secretary, he has advocated mandatory limits on the emission of greenhouse gases.

The scientific community, however, has largely embraced the nomination. “He's a well-known science policy expert in energy and environment,” said Bush science adviser Marburger. “I think he's well qualified to have this position.” Neal Lane, who served as science adviser for President Bill Clinton, was more effusive. “John Holdren has the stature and all the knowledge and skills to be an outstanding science adviser to President Obama,” he told physcisworld.com. “John is a physicist with particular expertise in the areas of energy, climate change, and arms control, but he understands the larger set of issues OSTP will have to deal with.”

Obama used the same broadcast to announce his nomination of Jane Lubchenco, whom he described as “an internationally known environmental scientist and ecologist,” as head of National Oceanic and Atmospheric Administration, the agency that monitors Earth’s environment, and coastal and marine resources. Lubchenco is a professor of marine biology and zoology at Oregon State University.

Obama also named Eric Lander, a mathematician with an Oxford D. Phil, a pioneer in genome research, and founding director of the Broad Institute, and Harold Varmus, Nobel Laureate in medicine, former director of the National Institutes of Health, and current director of the New York’s Memorial Sloan-Kettering Cancer Center, to serve with Holdren as co-chairs of the President’s Council of Advisers on Science and Technology (PCAST).