Europe's first solid-state heat-capacity laser is said to be the only one of its kind to emit at an eyesafe wavelength of 1.64 microns.

Schematic setup of the SSHCL

The first solid-state heat-capacity laser (SSHCL) with an erbium-doped active medium could offer an eyesafe alternative to traditional sources used in industry, medicine and defence. The diode pumped SSHCL offers up to 76 W of output power as well as high laser efficiency (Applied Physics B 93 817).

"I have realized the first European SSHCL, which is simultaneously the world's first eyesafe SSHCL," Marc Eichhorn, a researcher at the French-German Research Institute of Saint-Louis, France, told optics.org. "This laser can be compared to the eyesafe CO2 laser, however, with a much shorter wavelength resulting in much higher machining precision."

Since heat does not flow towards an active heat sink, the thermal gradient in a SSHCL is greatly reduced. This results in less thermal lensing, birefringence and mechanical stress. But most importantly, it allows much higher pump powers and output powers to be reached before crystal fracture.

According to Eichhorn, the eyesafe laser opens up new application areas that can take advantage of fewer safety constraints. "In industrial applications such as welding or cutting the safety issues connected to laser radiation are much lower compared with a Nd:YAG or Yb:YAG laser," he said. 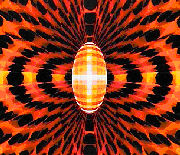 In the SSHCL design, an Er:YAG rod is placed inside a two mirror cavity, consisting of a high reflector and a 10% dielectric output coupler. A set of laser diode stacks is used to pump the laser rod from both ends. The diode radiation is homogenized and compressed by two hollow ducts located at the ends of each rod, which enables a pumping efficiency of 94%. The laser diodes are battery powered using standard lead-gel accumulators, and a high-current electronic switch is used to supply the electrical energy to the laser diodes.

Although Eichhorn has no current plans to commercialize the laser, he intends to investigate the thermal effects within the laser medium and understand the interdependencies of the laser parameters. Due to the limitations in pump power and the thermal increase in laser threshold, the laser could be operated for up to 2 s.