The French firm is taking on JDSU and Bookham with its 980 nm GaAs-based terrestrial pumps, and is confident they will contribute to 20 percent revenue growth in 2009. 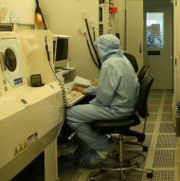 3S Photonics is taking business from its vertically-integrated rivals and is ramping up its output accordingly. Surprised by the level of interest in its InP transmission lasers, the French fab began offering GaAs-based 980 nm pump lasers for the terrestrial market six months ago. Production is now accelerating and is destined to be a key part of 3S' plan to expand its revenue 20 percent in 2009.

"Only two vendors - JDSU and Bookham - are producing these pumps in volume today," said 3S' director of marketing, Yannick Bailly. "These two are also manufacturing optical amplifiers. The market is demanding alternative supply solutions because that causes problems for some of the customers."

This marks the next stage in the ex-Alcatel and Avanex III-V fab's strategy, in which it expands from the product lines it started business with in June 2007. Then, when 3S was divested from Avanex, its original aim was returning to profitability from its submarine pumps and transmission lasers. That was achieved in the fiscal year ended June 30 on the basis of €27.9 million in revenue. Consequently, 3S is now beginning the second part of its ongoing strategy: expand existing technologies into new markets.

To this end Bailly says that 3S is also developing tunable transmitter optical sub-assembly (TOSA) discrete modules, whose ramp is six to twelve months behind the 980 nm pumps. The company also looks set to benefit from two upcoming commercial deals with Japanese firms in the telecom sector, due to be announced in the coming months. All these factors are combining to make Bailly and his colleagues confident in meeting its ambitious revenue growth outlook. "The current quarter's sales should be about €8 million," he said, "so we are in good shape."

Much of the company's revenue still comes from pump lasers for the submarine optical communication market, targeting major undersea backbone links. This comparatively stable sector is helping the 3S Photonics weather the global economic storm. "We have very good visibility in the submarine market," Bailly explained. "Today we have clear visibility to end calendar year 2010."

The high-reliability GaAs laser diode technology it uses in submarine pumps was crucial in developing its latest 980 nm products, and also enables 3S to make terrestrial pumps that can run uncooled. This is something that Bailly claims only Bookham and German diode maker Lumics were offering commercially.