Arrays of microLEDs can be used in imaging optics, biophotonics and other fields. Simon Andrews explains to Tim Hayes what the impact of this enabling technology could be. 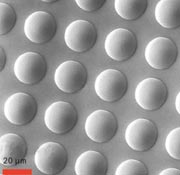 Micro-pixellated LEDs, or microLEDs, are light-emitting arrays where the emitting area consists of thousands or even tens of thousands of micron scale elements. The Institute of Photonics, an industry-focused research unit based at the University of Strathclyde, UK, is at the forefront of this emerging technology, and has developed what it believes are the highest performance microarrays yet demonstrated.

"We have developed a range of microLEDs in various formats, based on the light-emitting capabilities of gallium nitride (GaN) semiconductor materials," explained Simon Andrews, business development manager of the Institute of Photonics. "This allows us to generate what is in essence a programmable pattern of light."

The technology involves taking wafers of GaN or similar materials and microstructuring them to give individually addressable LEDs on a microscale. "We have achieved 1000 LEDs per square millimetre," said Andrews. "This was the goal of a recently completed EPSRC basic technology programme called BT1000, in which the institute was the lead partner and Martin Dawson was principal investigator."