optics.org speaks to the team that has produced 3.7 femtosecond pulses in the deep ultraviolet, the shortest duration ever reported in this waveband. 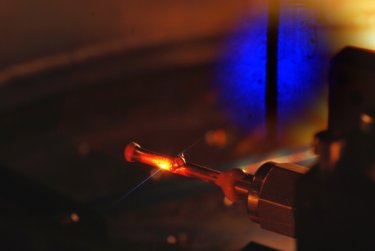 Deep ultraviolet (DUV) pulses with a duration of just 3.7 femtoseconds have been generated by researchers at the Max-Planck-Institute for Quantum Optics in Germany. The pulses are said to be the shortest ever observed at this wavelength range and could allow the team to influence the outcome of chemical reactions by controlling the motion of electrons in molecules. (Optics Express 16 18956)

"A key challenge in ultrafast science is to develop the tools that allow us to trigger and probe electron motion on timescales of just a few femtoseconds or even attoseconds," Eleftherios Goulielmakis told optics.org. "Because molecules absorb ultraviolet light to get electronically excited, we have focused our efforts on realizing intense ultrashort pulses in this spectral range."

Previously, the shortest pulses in the DUV (wavelengths shorter than 300 nm) had a duration of 8 femtoseconds. Much of the research effort focused on compressing the ultraviolet pulses after they had been generated, which is a formidable challenge as this requires precise dispersion control.

Here, Ulrich Graf and colleagues take a different approach. They upconvert 780 nm, 0.25 mJ pulses with a duration of 6 femtosecond pulses directly into the UV range by means of harmonic generation in a noble gas jet.

The resulting 3.7 femtosecond pulses are characterized using a dispersion-minimized SD-FROG approach and have energies in excess of 1.4µJ. The conversion efficiency is approximately 0.6%.

"We use a compressed ultrashort infrared laser pulse to directly generate the ultraviolet one," explained Goulielmakis. "The UV pulses inherit their ultrashort duration from the driving laser pulse. What's more, the generated UV pulses are some 1.5 times shorter than the incident pulse due to the high nonlinearity of the frequency upconversion mechanism."

According to Goulielmakis, the use of the noble gas also brings some enviable advantages. "It does not introduce any significant dispersion to the generated ultraviolet pulses so no compression of the generated light is needed," he explained. "Also, it does not reduce the spectral width of the generated pulses."

The group is now hoping to extend its approach to generate ultrashort pulses in the vacuum ultraviolet (VUV) spectral range (wavelengths less than 180 nm). "In the VUV, matter absorbs light even more and this spectral range will offer plenty of opportunities to explore and control the microcosm on an ultrafast scale," said Goulielmakis. "At the same time, we anticipate that these pulses will be substantially shorter and will approach the 1 femtosecond frontier."