Researchers have shown for the first time that a single near-infrared laser can be used to both trap and dissect living cells. 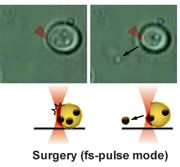 A team of researchers from the Philippines and Japan has shown that a single laser can be switched between continuous-wave (CW) and femtosecond pulsed mode to trap and penetrate yeast cells respectively. The researchers say that using a single laser with two operational modes simplifies the trapping system and allows complex and intricate manipulation of cell components (Review of scientific instruments 79 103705).

"As far as we know, this is the first time that the CW-mode of an ultrafast laser is functionally used in a system," Vincent Ricardo Daria, a researcher at the University of the Philippines, told optics.org. "While optical trapping and optical surgery is not new, it is the combination of both functionalities using a single laser that makes this work unique."

Optical trapping requires a low energy laser to avoid damaging the sample, while the opposite is required for optical surgery. Until now, two separate lasers were necessary to carry out each function – one for trapping and another for surgery. Daria and colleagues have now developed a single 780 nm Ti:sapphire laser that when operated in CW mode enables non-invasive trapping of cells and by switching to femtosecond pulsed mode, precise surgery can be performed.

"When the laser is in CW mode using around 10 mW of power, we can perform the non-invasive trapping of living yeast cells," explained Daria. "However, at the same power level, the femtosecond pulse mode facilitates combined non-linear optical processes that enables precise incision of the cell walls. By modulating or lowering the intensity of the incident laser, we can attain incision sizes smaller than the diffraction limit of light."

The team switched between CW and pulsed mode by adjusting the output of the pump laser. "Ultrafast lasers normally come with an electronic control module to trigger fs-pulse mode," explained Daria. "CW-mode is achieved by disturbing the fs-laser cavity by temporarily shutting off the pump laser."

In the set-up, the laser is introduced into an inverted laser-scanning microscope and brought to focus inside the sample using a water immersion objective lens. A dichroic mirror is used to direct the NIR laser to the objective lens while allowing images of cells at the focus of the same objective lens to be viewed on a CCD camera.

According to Daria the potential of such a set-up goes beyond trapping and surgery of yeast cells alone. The combined system can also be used for yeast cell growth analysis, tissue and cell engineering and micro-manipulation for reproductive medicine.