Chinese researchers are hoping to commercialize a technique that uses a blue LED to detect nitrogen dioxide cheaply and easily. 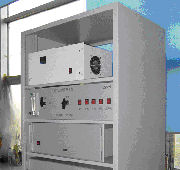 A blue LED is at the heart of a low-cost and straightforward method of measuring the industrial emission of nitrogen dioxide (NO2) from coal combustion. The researchers say that their real-time technique is simpler than other optical detection systems with the same precision and have even established a company to commercialize their idea (Applied Optics 47 5337).

"NO2 is one of the main pollutant gases but is difficult to measure due to its broad absorption spectrum," Zhiguo Zhang, a researcher at the Harbin Institute of Technology, told optics.org. "Previous techniques have used a broad light source such as a Xenon-arc lamp, but using a low-cost LED means that the cost of pollutant monitoring can be significantly reduced and the method widely employed."

The team made its real-time measurements of NO2 concentration at room temperature and atmospheric pressure, and reported a detection limit of 3 ppm for an integration time of just 2 s.

In the set-up, a lens with a focal length of 100 mm was used to collect light emitted by a broadband 100 mW LED operating from 456 to 484 nm. The light was transmitted through a 50 cm long gas cell containing NO2. The light exiting the gas cell is then focused by a collimating lens and collected by a spectrometer consisting of a monochromator and a 2048-element CCD-array detector.

"An LED that emits around 465 nm is particularly suitable for probing NO2 since the gas exhibits strong absorption at this wavelength and sufficiently well-resolved features to reduce the interference from other gases," explained Zhang. "The monochromator measures the transmission spectrum of the light after it has passed through the gas. The spectral data are then received by a computer, which calculates the concentration of NO2."

Zhang and colleagues are now investigating how to measure other gases such as mercury and arsenic and to decrease the cost of the instrument further.