Researchers embedded quantum dots emitting at 1.5 microns into a 3D photonic crystal for the first time. 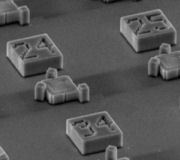 A team of Japanese scientists has overcome current fabrication issues to build the first 3D photonic crystal containing quantum dots that emits at the crucial telecoms wavelength of 1.5 µm. The photonic crystal allows simultaneous control of both electrons and photons, which could benefit quantum communication applications (Nature Photonics doi:10:1038/nphoton.2008.202).

"We can control electrons and photons at the same time by combining a 3D photonic crystal point-defect cavity with its electronic counterpart – the quantum dot," Kanna Aoki, a researcher at the University of Tokyo, told optics.org. "This system provides us with fine control over the flow of light, which could benefit almost all existing optical devices and is a step towards triggered single photon sources and other quantum cryptography devices."

Until now, fabrication of 3D photonic crystals involved crystal growth, dry etching and heat treatment applied in a repeated fashion. Such techniques cause severe damage to the structure of the photonic crystal, altering its optical properties. The Tokyo team instead prepared unit components using a single semiconductor fabrication procedure without the use of heat, allowing components to be assembled with high precision and minimum damage.

"Severe processing conditions totally alter the optical properties of a cavity and active sites from the designed or original values," explained Aoki. "Since width of resonant wavelengths of a point defect cavity and emission wavelengths of quantum dots are very narrow, matching these two wavelength ranges is difficult."

In Aoki's approach, the final 3D structure was broken up into simple building blocks. The team used a micromanipulation technique that avoids the excessive use of conventional semiconductor processing to assemble GaAs photonic crystal layers into a 17-layer woodpile structure. Point defects containing InAsSb QDs were introduced into the middle of the GaAs active layers with a quantum dot density of 9 x 109 cm–1.

"In such a system, photon switching becomes possible by controlling the excitation state of electrons and sorting generated photons by their polarization directions into a certain polarization-selective cavity," explained Aoki. "Light emitted from the quantum dots with a wavelength that matches that of the resonant modes of the cavity will be enhanced, while light with a wavelength that does not match the resonant modes will be inhibited in the crystal."

The team says that its work is just a first step in the study of optical 3D photonic crystals and that much work remains to be done before commercial applications can be explored. "Realization of high-quality factor cavity resonance is essential for further development of 3D photonic crystal devices," concluded Aoki.