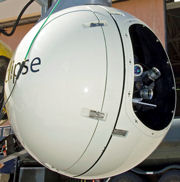 LIDAR technology, which uses the properties of scattered light to determine the range and other characteristics of a distant target, promises significant improvements over the systems currently used for planetary navigation in space probes. NASA's Langley Research Centre has developed two LIDAR systems designed to allow lunar landers to automatically identify and navigate to a safe landing site during their final descent to the surface.

"LIDAR allows us to improve the precision of a lunar landing from 1 km to 30 m, and to detect and avoid hazardous terrain such as rocks and steep slopes," NASA's Keith Henry told optics.org. Preliminary testing of the LIDAR methods in NASA's Autonomous Landing and Hazard Avoidance Technology (ALHAT) project indicates that the accuracy and speed of update with LIDAR are more than 10 times higher than the conventional radar-based sensors used in Phoenix Mars Lander and Mars Science Lab.

The two LIDAR techniques are intended to tackle two distinct challenges. One is "flash" LIDAR, in which all of the available scene information is captured in a single shot or laser flash, allowing topography mapping and precision navigation.

"The flash LIDAR was originally developed by industry and modified to suit ALHAT needs," said Henry. "Designing a sensitive and low-noise large format detector array, and an integrated circuit able to determine time of arrival for each pixel individually in real time were particular challenges," said Henry. A 128 × 128 array was used in the existing system, but the team intends to increase this to 256 × 156 in the future.

The other technology is Doppler LIDAR velocimetry, which uses the Doppler shift in the return laser radiation to directly measure the vehicle's vector velocity, along with altitude measurements computed using frequency modulation. "This required an ultra-narrow linewidth laser of purely single frequency, a low noise receiver, and frequency modulation with a very high degree of linearity," commented Henry. (See also coverage of other applications of Doppler LIDAR on optics.org.)

Along with further flight trials for the two LIDAR technologies, NASA is also developing associated real-time algorithms, for analysing the data produced by the sensors. "The next steps will include combining the LIDARs and the algorithms into a complete guidance and navigation system, and demonstrating its potential for lunar and other planetary missions," said Henry. "The technology could also be applied to vehicle rendezvous and docking procedures, and Earth re-entry landing systems."