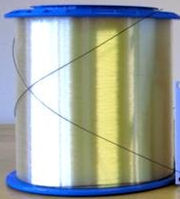 Internet security systems based on the quirky principles of quantum mechanics are closer to being a reality thanks to researchers in the UK, who have achieved a one-hundred fold increase in the rate at which quantum cryptography can be carried out.

The team showed that quantum keys can be sent along a 20 km section of optical fibre at a rate of over 1 Mbit/s, an achievement that could allow users to communicate with complete security across computer networks. Indeed, the announcement comes as European researchers gather in Vienna to demonstrate the world's first use of quantum cryptography within a commercial telecommunications network.

Quantum cryptography is a way of ensuring the security of electronic data transfer by exploiting the strange rules of quantum mechanics. It allows users to exchange keys encoded in individual quantum states, such as the phase of photons, which they then use to encrypt and decrypt their messages. This approach is in principle, impossible to decipher, because quantum mechanics dictates that any eavesdropper will alter the keys through their very act of measuring them.

A number of companies are commercializing quantum cryptographic products, and a number of potential customers, including banks, governments and network operators, are trialling these products. However, to date it has only been possible to send quantum keys between two fixed points.

Andrew Shields, who leads research on quantum information at the Cambridge Research Laboratory, points out that being able to carry out cryptography across a network has a number of advantages. These include the possibility of forming a secure link to any other location covered by the network; communication between multiple users; greater robustness, since communications can be rerouted if single links are severed; and communication over larger areas, since each link has a maximum length of about 100 km because of signal attenuation in the fibre.

Quantum cryptography has thus far not been possible across networks because of the need to share quantum key bandwidth between many different users; up to now this bandwidth has simply been too low. Typically, this has been less than 10 kbit/s for a 20 km long fibre link. Shields and colleagues have boosted this to 1.02 Mbit/s by improving the semiconductor devices used to detect the single photons that make up quantum keys. It is essential to use single photons for this purpose otherwise an eavesdropper could siphon off the excess photons without revealing their presence.

These devices are called avalanche photodiodes since they produce an avalanche of electrons whenever they detect a photon. These electrons can then be registered as a current in an electric circuit. Unfortunately, some of these electrons can get trapped in the device and then go on to register a spurious signal at a slightly later time, which means that the device must wait until all potential signals have died away before accepting the next incoming photon; something that limits the speed at which it can work. Toshiba's new photodiode is sensitive to much weaker avalanches that entail a much smaller probability of false signals, which means it can operate at a higher frequency.

The Toshiba group has also installed its existing kilobit per second technology in a city-wide quantum cryptography network in Vienna. Developed by scientists from across Europe in an EU-backed project known as SECOQC, the network uses existing commercial telecommunications infrastructure to send and receive quantum keys between six nodes that span links ranging from 6 to 82 km. Shields says that Toshiba's technology, one of six different kinds used in the network, has functioned without problem for the last two months in the Austrian capital.

The next step, according to Shields, is to replace the kilobit per second devices with the new megabit technology. The latter is currently spread out over an optical bench in Cambridge but should be shrunk down so that it can fit into a standard 19-inch communications rack within about two years, says Shields. "Quantum key distribution can have a very bright future," he adds. "I believe that it will be fully commercialized within the next three to five years, and one day could be a standard for information security in all communication networks."