An imaging system that contains two interferometers could help astronomers in South America to see much fainter sources than ever before with unprecedented precision. 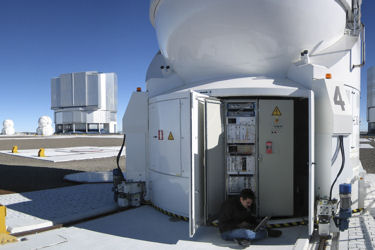 The imaging capability of the Very Large Telescope Interferometer (VLTI) in Chile will be boosted by an instrument that can measure the angle between two stars with record accuracy. Developers hope that the phase referenced imaging and microarcsecond astrometry (PRIMA) instrument will be available to the astronomical community by the end of 2009.

"PRIMA's expected astrometric precision of around 30microarcseconds is unmatched by any other existing astronomical facility, whether on the ground or in orbit," Gerard van Belle, instrument scientist at the European Organisation for Astronomical Research, told optics.org. "PRIMA will not only enable us to detect planets orbiting their parent stars, but also measure their mass."

Operating at a wavelength of 2.2 microns, PRIMA is designed to see if a star 'wobbles' to and fro due to unseen planetary companions. The instrument comprises two interferometers stacked upon each other, which take data from two sources simultaneously. The brighter source can be used for tracking, allowing the second interferometer to stare at the fainter source for longer than is currently possible with existing interferometers.

"PRIMA locks onto a bright source and tracks the optical distortions introduced by the turbulent atmosphere. It then feeds the tracking corrections over to the second channel," explained van Belle. "This leaves the second channel free to stare at a second source without the interferometric fringes being smeared out by atmospheric distortions."

While orbiting instruments avoid atmospheric distortions altogether, PRIMA outperforms them due to the large distances over which it can gather data. "By having a separation between individual telescopes at the VLTI of up to 200 m, PRIMA is able to measure small angles with unmatched precision," commented van Belle.

A limitation of the system is that it can only work within a relatively small patch of sky at one time. This is because the angle between the bright source and the second source must be sufficiently small to ensure atmospheric errors are common.

The developers are currently testing the instrument before making it available to the astronomical community. "There is a lot of interest from the community about the opportunities offered by PRIMA, so I am eager to keep the amount of time spent on commissioning to a minimum," concluded van Belle.