These are exciting times for the high-power diode laser (HPDL) market. Driven by improvements in the technology, HPDLs are finding a growing number of uses and are emitting over an ever-wider range of wavelengths. Today, HPLDs are commonplace in applications spanning from welding of plastics in automotive and medical device manufacturing and direct imaging of printing plates through to medical treatments, and as pump sources for diode-pumped solid-state lasers for industrial and scientific applications. This article looks at the available wavelengths, improvements in the technology and applications.

Available wavelengths
Red laser diodes date back to 1962, when the first semiconductor laser was fabricated. Today, the largest application in terms of units is optical storage, such as CD players (785 nm) and DVDs (640 nm). Such low-power emitters are also used in laser pointers and printers. 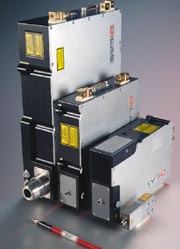 Driven by the needs of photodynamic therapy, laser diode bars are now available with several watts of optical output power at 632, 635 and 652 nm. Improvements in the epitaxial growing processes of InGaAlP materials as well as in the optical coupling methods have led to the availability of 2–5 W fibre-coupled single-bar modules (see figure 1). With applications such as optical displays on the horizon, improvements in the beam profile and lifetime of red laser diodes are necessary.