Recent developments in cavity ring-down spectroscopy allow the technique to be used in a range of demanding applications. Lisa Bergson and Jerry Riddle bring Tim Hayes up to date.

Continuous-wave cavity ring-down spectroscopy (CW-CRDS) is a sensitive analytical method for detecting trace amounts of molecular species in a range of different environments. A development of absorption spectroscopy, it uses light rays carefully tuned to the unique molecular fingerprint of the sample species being detected.

"The technique has some significant advantages over other spectroscopic analysis methods," said Lisa Bergson, chief executive officer of Tiger Optics. "The basic principle of CRDS is inherently low maintenance. It does not need consumables; it can take measurements very quickly and is extremely accurate," (see box below).

Tiger Optics has been in a position to promote the adoption of CRDS ever since the key breakthrough discovery by Kevin Lehmann of Princeton University, US, who proved in the early 1990s that compact, relatively inexpensive and widely available continuous-wave (CW) lasers could substitute for the costly, cumbersome pulsed lasers previously used in CRDS-based research.

Available sources
Acceptance of the technique for real-world applications has been closely tied to the availability of reliable CW sources. "Commercialization of the technique was really made possible by the use of CW lasers, which allowed the required power of light to become affordable and practical for commercial use," said Bergson. "CW sources are compact, economical and easy to control." 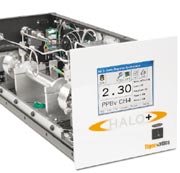 A core market for Tiger Optics is semiconductor manufacturers and the gas companies and contractors that support them. According to Bergson, almost all of the major and many specialized manufacturers of semiconductor chips and their high-purity gas suppliers employ Tiger's CRDS analysers.

New applications are emerging rapidly, however, including the use of CRDS in environmental monitoring and cleantech sectors. Currently the company is working with laboratories developing standards for emissions monitoring, such as NIST in the US. Another customer is a European consortium interested in analysing formaldehyde and methane as part of its emissions control programmes.

"We are really excited about the environmental and alternative energy sectors as markets for this technology," commented Bergson. "And Tiger Optics is considered a cleantech company in and of ourselves. Our VC investors are cleantech investors." 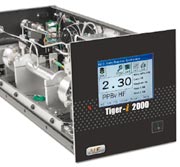 Cleanroom applications
Tiger's original product is the LaserTrace model, which employs fibre-optic cables to connect up to four sensor cavities to one electronics module. This permits the user to measure as many as four different species and measurement points with a single instrument. This principle has been further developed in analysers specifically designed for use in cleanroom environments. "This is a breakthrough for us, moving from analysing molecules in industrial gases of one form or another, to an ambient open-space measurement in air," said Bergson. The product is called the Tiger-i line, and was largely developed specifically to satisfy the need to identify HF, HCl and NH3 in semiconductor production. 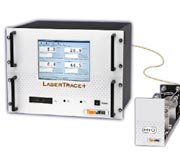 "By enabling chip manufacturers to quickly and reliably correlate events, such as tool issues, chemical spills, material outgassing, and even loadlock openings, process yields can be optimized for maximum value," noted Bergson. "Contaminants in the parts-per-trillion levels, when combined with ammonia or amines, can lead to contamination and overall quality erosion. The Tiger-i's built-in reference cell and automated tune function assure consistent performance, with no need for calibration, consumables or maintenance."

Multiple wavelengths
Given the success of CRDS in detecting individual molecules, the capacity to measure multiple species with a single device is the obvious next big step forward for the technique. "It would be a very welcome development for the community that we serve, and we have developed a multispecies CRDS analyser that will soon be going into field trials," said Bergson.

The breakthrough involves using prisms rather than mirrors, which allows multiple wavelengths over a broad spectral range to be fired into the cavity in unison. A simultaneous reading of the decay rates of individual species at different wavelengths can then be generated. "In this case we are still working in the near-infrared, but we are researching the use of different materials that could potentially allow us to go into the middle-infrared or even ultraviolet regions. This is a whole new step for CRDS and an exciting development for the future."

• This article originally appeared in the October 2008 issue of Optics & Laser Europe magazine.