US researchers are working with an optoelectronics firm in Taiwan to bring brighter, thinner and cheaper LCDs to the market. 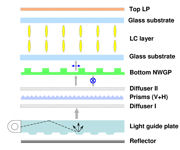 Replacing one of the linear polarizers in an LCD with a nanowire grid polarizer (NWGP) is helping researchers from the University of Central Florida to create thinner and more energy efficient displays. The team is hoping to collaborate with LCD maker Chi-Mei Optoelectronics to build test devices in the near future (Applied Physics Letters 93 121104).

"We have used a NWGP to replace the bottom linear polarizer in an LCD for the first time," Zhibing Ge, a researcher in Florida's College of Optics and Photonics, told optics.org. "We found that this leads to brighter, thinner and cheaper LCDs that exhibit similar viewing angles as traditional devices."

Now, the Florida team has replaced the reflective polarizer and the bottom sheet linear polarizer with one NWGP. By combining the function of the two polarizers into one backlight recycling component, the performance of the LCD is boosted and its thickness is reduced.

"While the NWGP works in conjunction with the top sheet linear polarizer to warrant a high contrast ratio, the NWGP can also function as a reflective polarizer for backlight recycling," explained Ge. "This means that the display can be thinner and cheaper, since one linear polarizer sheet is removed." 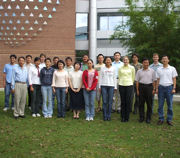 In the setup, the 200 nm thick NWGP is made from a grating structure with a pitch of around 100 nm. It reflects incident visible backlight that is parallel to the metal wire grid, while transmitting light that is perpendicular to the grid. This means that the reflected backlight can be recycled to enhance the display brightness.

The next step for the team is to target new LCD applications such as 3D displays and sunlight readable transflective LCDs for mobile displays.