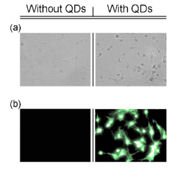 With and without QDs

The first biocompatible silicon carbide QDs for fluorescence imaging have been fabricated by a team of scientists in France. The result is a major advance since all quantum dots used for imaging so far were toxic to cells (Applied Phyics Letters 92 173902).

Quantum dots based on II-IV and III-IV group semiconductors are used for in vitro imaging of biological cells because of their remarkable luminescent properties. They can be tagged onto cells and their fluorescence measured. The only problem is that these quantum dots are highly toxic to cells, which means that they have to be coated with a protective layer, such as a polymer, before they can be employed. However, no protective layer is really good enough to completely shield cells.

Now, Jacques Botsoa of the Institut des Nanotechnologies in Lyon and colleagues may have found a solution to this problem. The silicon carbide quantum dots that the researchers used are highly luminescent, chemically inert, stable and biocompatible. They could be used to bio-image and label living cells as well as study the mechanisms of quantum transport through cells and nuclear membranes.

Botsoa and co-workers made their quantum dots (QDs) by electrochemical anodization etching of low resistivity grade bulk 3C-SiC polycrystalline wafer. A porous layer formed that was then removed from the substrate and ground into a powder. This powder was dispersed in Krebs buffer solution and centrifuged to produce a stable colloidal suspension containing only very small and uniformly dispersed nanoparticles that measured around 1–4 nm across.

These QDs have dimensions smaller than the Bohr diameter of the exciton (around 5.4 nm) and exhibit highly efficient "above-gap" luminescence thanks to quantum confinement.

To test their QDs, the researchers added the suspension to cell cultures of 3T3-L1 fibroblasts. After incubation overnight, the cells were rinsed twice in Krebs buffer and cell luminescence was observed using a fluorescence microscope under UV/blue light excitation (see figure).

The team says that it would now like to study the accumulation kinetics of the QDs inside living cells.