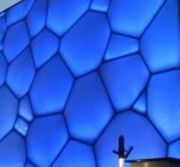 “New applications are increasing,” said Ivan Lin, an analyst with market researcher LEDinside in Taipei. “LEDs are increasingly used as backlights for notebook computers, in street lights and for factory lighting.”

The high-brightness LED market grew by 9.5% to $4.6 billion in 2007, increasing from the 6% growth rate in 2005 and 2006, according to analysts at Strategies Unlimited. The use of LEDs for signs, cars, signals and illumination together grew by 20% in 2007, with illumination applications having the highest growth rate. The overall high-brightness LED market is forecast to grow at a cumulative growth rate of 20%, reaching $11.4 billion in 2012.

Taiwan is forecast to have a 30% market share by 2010, as many of Taiwan’s flat-panel display makers prepare to enter the business. Currently the country has the world’s second largest LED industry, its 20% share being second only to Japan’s 37% share of the market.

The Beijing Olympics provided a particular stimulus to sales. Organizers employed LEDs to illuminate the stage at the opening ceremony for the games, along with using 44,000 of the lamps in a 147 x 36 metres screen at the venue. At least 36,000 LED lamps illuminated the translucent exterior of the gigantic Water Cube where the swimming competitions took place.