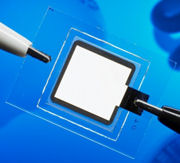 Organic CMOS transistors are attractive for applications where classical silicon-based systems are too expensive. To date most developments in organic CMOS devices are based on pentacene, which usually allows for p-type transistors only, so organic thin-film transistors (OTFTs) have had to use two different organic semiconductors as active layers in order to show n- and p-type behaviour. Novaled has now demonstrated that both n-type and p-type OTFTs can be made from only one active material.

"It is well known that using doped transport layers in OLEDs reduces the driving voltage, increases lifetime and boosts power efficiency," Anke Lemke of Novaled told optics.org. "Now we have shown that introducing redox dopants into OTFTs can change the type of majority carrier. The performance of p-type pentacene OTFTs can be improved by using p-dopants, while introducing n-dopants can change the OTFT from p- to n-type."

This enables the use of "CMOS logic" in organic electronics applications, circuit designs based on n- and p-type transistors featuring low static power dissipation compared to logic circuits using only one type of transistor. Both the performance and the manufacturability of OTFT circuits could be improved by this breakthrough.

"The complementary logic-OTFTs could be used in the lighting and display markets, but also in other sectors such as organic RFIDs," said Lemke. "In the display field, possible applications are backplane driving circuits for active matrix displays."

Introducing dopants into existing organic transistor technologies seems straightforward, but Lemke pointed out that the processing compatibility appears to be even more important with OTFTs than with OLEDs. "Our results so far are proof-of-concept, and we are now starting to transfer our approach to industrial processes. The number of commercially available organic electronic devices is still small, but as they become more widely available we are optimistic that our technology can be introduced commercially in the medium-term."

• Novaled and Vitex have announced a co-operation on OLED thin-film encapsulation, intending to combine the advantages of the Barix thin-film technology developed by Vitex and Novaled's doping technology and produce ultrathin highly efficient OLEDs.