A solid-state laser that offers practical output powers and a tuning range of 425 to 489 nm is unveiled by researchers in Spain. 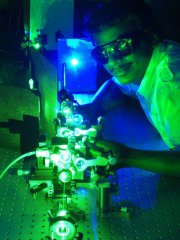 "To our knowledge, there are no other practical solid-state laser technologies that can provide tunable blue radiation," Goutam Samanta, a researcher in the nonlinear optics group at ICFO told optics.org. "The single-mode and high output power, possibility of power scaling and expansion of the wavelength range makes our approach exceptionally promising."

Generating tunable blue light at useful powers and with desirable output characteristics using solid-state laser technology remains challenging. In the CW regime, one common approach is to frequency double a 946 nm Nd:YAG laser. Although this produces power levels of a few Watts at 473 nm, the major drawback is the lack of tunability.

CW SROs have been widely used to generate light in the 1.5 to 4.5 micron range using PPLN as the nonlinear material. Generating shorter wavelengths however requires a pump source emitting in the green at 532 nm. The problem here is that PPLN suffers from photorefractive damage when subjected to visible radiation.

The key to the result is a new nonlinear material, MgO-doped stoichiometric lithium tantalate (MgO:sPPLT), which is used as the gain medium in the OPO.

By varying the temperature of the MgO:sPPLT from 71°C to 240°C, the SRO signal beam could be continuously tuned from 978 to 850 nm. The corresponding second harmonic wavelengths from 489 to 425 nm are generated by varying the internal angle of the BIBO crystal from 163.8 to 155.2 degrees.

The researchers believe that a 10W pump laser at 532 nm would generate more than 1W of tunable single-frequency radiation over the 300-530 nm range with excellent beam quality.