Sony has unveiled the world's brightest red laser diode array that it says is ideal for use in projection devices.

A laser array developed by Sony emits a record 7.2 W of optical output at a wavelength of 635 nm. The company believes that the high brightness, high efficiency and room temperature operation of its semiconductor laser array makes it well suited for projector applications.

Sony's newly developed diode array exhibits a wall plug efficiency of 23% at 25 °C and is 1.6 times brighter than its 645 nm wavelength version that it developed in 2005. The 635 nm array is composed of 25 broad stripe laser bars, each measuring 10 mm in length, mounted on a 2.5 cm copper heat sink block. 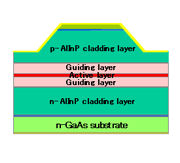 By introducing new die bonding technologies for attaching the laser array to the heat sink, Sony has enabled high levels of heat dissipation from the laser array. The accuracy of the laser bar mounting process has also been improved to enhance the coupling efficiency between the laser array and other optical devices. 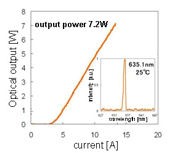 The company adds that it has achieved low threshold currents and improved laser characteristics thanks to high crystal purification levels and a high concentration of magnesium doping within the AlInP cladding layer.

Sony will present the results at the 69th Autumn Meeting of the Japan Society of Applied Physics to be held 2–5 September at Chubu University in Nagoya, Japan.