A quantum dot laser that emits at 1543 and 1571 nm simultaneously is the first in a new generation of dual-wavelength self-modelocked sources.

Researchers in Canada believe that they are the first to fabricate an InP-based quantum dot (QD) laser that emits self-modelocked pulses at two wavelengths simultaneously. The device emits at 1543 and 1571 nm and could ultimately play a role in applications such as all-optical clock recovery and high-bit rate transmission. (Optics Letters 33 1702)

"The traditional approach to modelocking is to use a two section device, one section to provide optical gain, the other to act as a saturable absorber," Jiaren Liu of the National Research Council Canada told optics.org. "We have been investigating a single section device which is modelocked over the entire current range above threshold."

Liu adds that improvements in the growth of QD material have resulted in devices with low threshold currents and high output power. "We now have excellent control of the dot growth, producing high dot densities with narrow size distributions resulting in a high performance gain medium," he said. "This allows the observation of self pulsation and the high peak powers required to observe dual-band modelocking."

The team's laser is based on an InP substrate and incorporates five InAs QD layers. The lasers were tested using a cw injection current on a temperature-controlled heat sink and all measurements were carried out at 291K.

Liu and colleagues report that modelocking was initiated at a current of 20 mA. As the current was increased, the output spectrum of each device broadened and split into two peaks around 40 mA. The higher the current bias, the larger the wavelength difference between the two peaks. 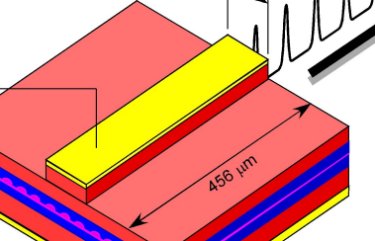 "The splitting of the laser peak at twice threshold is purely a coincidence," commented Liu. "We believe the splitting is decided by the intracavity AC Stark effect with the separation between peaks being twice the Rabi frequency. Once the Rabi frequency (which is dependent on the intracavity laser intensity) is comparable with the initial lasing linewidth, we observe the dual-wavelength modelocking."

The repetition rate of the pulses at the two different wavelengths was identical and measured to be 92.5 GHz. The pulse width is below 960 fs, and the average power coupled to a cleaved singlemode fibre was approximately 9 mW at 60 mA.

"We are in the early stages of studying the dual-wavelength modelocking process," concluded Liu. "More work needs to be done to understand the physics behind the self pulsation behaviour as well as the dual-wavelength modelocking. So far we have been able to achieve a tuning range of 40 nm. By optimizing the design, fabrication and device operation, we believe we can tune even further."