Laser beams are entangled in space

A breakthrough in laser entanglement could allow optical measurements to beat the diffraction limit. 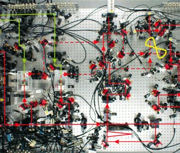 Physicists in Australia and France have worked out a way to entangle the spatial properties of two laser beams for the first time. Such entangled beams could someday be used to make optical measurements at higher degrees of accuracy than possible with a single beam and even transmit large quantities of quantum information (Science 321 541).

In the weird world of quantum mechanics, entanglement means that particles can have a much closer relationship than allowed by classical physics. For instance, two photons can be created experimentally such that if one is polarized in the vertical direction, then the other is always polarized horizontally. By measuring the polarization of one of the pair, we immediately know the state of the other, no matter how far apart they are.

In principle, entanglement could be exploited in a wide range of applications such as the secure transmission of quantum-encrypted information or in quantum optical-measurement systems that are more accurate than their classical analogues.

Entanglement was first demonstrated in pairs of particles such as photons, but more recently physicists have also been able to entangle much larger entities such as laser beams, which contain many photons. This is possible because a laser beam can be created in a single electromagnetic mode, which can be described as a specific quantum state.

The experiment shows that any degrees of freedom of a quantum system are fair game when it comes to creating entanglementSeth Lloyd, MIT

Physicists have already shown that two laser beams can be entangled such that the polarization of one beam can be determined by measuring the polarization of the other. Researchers have also been able to entangle laser beams in terms of the amplitude modulation (AM) or frequency modulation (FM) of the laser light — opening the door to the use of such entangled beams in the transmission and processing of quantum information.

Now, Hans Bachor and colleagues at the Australian National University have managed to entangle simple spatial properties of two laser beams — the directions of travel and positions of the beams.

The team tested this by firing two similar laser beams at a beamsplitter to produce two entangled beams that travelled at right angles to two different detectors, where V(Θ2–Θ1) and V(X1+X2) were measured. Although both variances were not zero, they were very small. This allowed the team to conclude that although the two beams were not perfectly entangled, they did have a degree of entanglement.

Bachor told physicsworld.com that on a scale of 0 to 1, with 0 being perfect entanglement and 1 being no entanglement, their system scored 0.6. A perfect score was not achieved, according to Bachor, because of "quantum noise" in the experiment.

Bachor believes that the spatial entangling of laser beams could allow large amounts of quantum information to be transmitted over relatively short amounts of time. This is because spatial modes of the beams — such as transverse oscillations — could be used to encode information.

Also, because the noise associated with transmitting data decreases as the number of photons increases, Bachor says that such transmission would have a high signal to noise ratio.

Entangled beams could also be used in "quantum metrology" to make optical measurements that are more accurate than permitted by the diffraction limit, which is half the wavelength of the light used to make the measurement. It turns out that this distance can be reduced significantly using entangled light — something that could be particularly important to those trying to make smaller and smaller integrated circuits using optical lithography.

Seth Lloyd of the Massachusetts Institute of Technology told physicsworld.com that Bachor's work is "an imaginative and artful experiment, which might have significant applications in enhancing the accuracy of quantum metrology". He added: "The experiment shows that any degrees of freedom of a quantum system are fair game when it comes to creating entanglement: we should not confine our attention to 'traditional' degrees of freedom such as polarization or frequency".