optics.org speaks to the research team that claims it has created the first supercontinuum in a water-core photonic crystal fibre.

By exploiting water's zero dispersion wavelength (ZDW), researchers from Brazil and the UK have generated what they believe to be the first supercontinuum in a liquid-core photonic crystal fibre (PCF). The set-up could be used in applications such as time-resolved spectroscopy, which currently rely on bulk water to generate a supercontinuum (Optics Express 16 9671).

"Supercontinuum generation in water has been widely studied but so far only in bulk water," Alexandre Bozolan of Mackenzie Presbyterian University in Brazil told optics.org. "The guided optics regime increases the nonlinear interaction length so much lower peak powers are required. In our case, powers never reached the self-focusing threshold and a combination of self-phase modulation and dispersion is believed to be the main trigger."

Water's ZDW falls around 1 µm, where a choice of lasers is commercially available to pump the PCF. The team opted to use distilled water to ensure that the supercontinuum was generated by the water itself, instead of elements such as chlorine or fluorine, which are commonly mixed with tap water.

The experimental set-up uses an optical parametric amplifier emitting 60 fs pulses at a repetition rate of 1 kHz. These pulses are coupled into a 5 cm length of water-core PCF, which has a core diameter of 10.7 µm. The team has come up with a "selective water-filling procedure" to ensure that water is only present in the core, and not the cladding holes (Optics Express 13 9014). The PCF was pumped at both 800 and 980 nm.

"We were able to confine light to around 80 µm2 for the whole 5 cm length of the fibre," said Bozolan. "In a typical bulk water experiment, light is confined to a 800 µm2 area along less than 2 mm. The drastic increase in the nonlinear interaction length, added to the low dispersion (which prevents temporal broadening), is the key to our accomplishments." 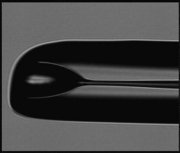 As part of its ongoing research, the team is now characterizing the impact of water evaporation. "We also plan to mix different components to water to increase nonlinearity and shift the ZDW," concluded Bozolan. "Our simulations show that smaller core diameters would shift the ZDW towards 800 nm, which would simplify the set-up because Ti:sapphire lasers could be used."

•  The 1st Workshop on Specialty Optical Fibres and their Application (WSOF2008) will be held in Brazil next month from 20–22 August. The research team will be presenting both its supercontinuum in water work and the liquid evaporation work at WSOF2008.