Wind conditions during the 2008 Olympic sailing regatta will be measured using a Doppler lidar system housed in a van. 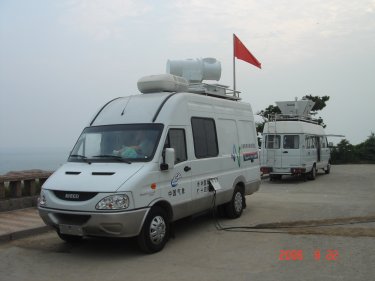 Sailors at next month's Olympic Games will benefit from the most up-to-date information on the wind conditions thanks to a mobile Doppler lidar that has been developed in China. The instrument measures the sea-surface winds just 10 m above the water and passes the information on to meteorologists in real time (Optics Letters 33 1485).

"The major users will be the meteorologists at the Olympic Sailing weather service," researcher Zhi-Shen Lui of the Ocean University of China told optics.org. "The wind is constantly changing speed and direction so athletes need to have the best information at the start of a run. The meteorologists will use Doppler lidar data as well as other traditional weather stations to guide the schedule. The unique feature of our lidar is its capability for scanning measurements with high spatial and temporal resolution."

The essence of any lidar experiment is to monitor a returning laser signal after it has been scattered. Doppler lidar takes advantage of the fact that the frequency of the returning laser beam will be shifted as it scatters off the various aerosols and molecules that are present in the atmosphere.

The lidar's transmitting system uses an injection-seeded diode-pumped Nd:YAG laser emitting 30 ns pulses at a repetition rate of 2.8 kHz and a wavelength of 532 nm. Returning light is captured by a receiver that makes use of a Schmidt-Cassegrain telescope. Given the importance of the frequency of the light, the team uses two iodine absorption filters, one in the transmitter and one in the receiver.

"The first iodine absorption module monitors the frequency of the transmitting laser pulse," commented Lui. "We use this technique to lock the laser frequency to a fixed frequency standard so that we can minimize the drift. The second iodine cell behind the telescope determines the frequency change after the laser is scattered by the atmosphere."

Lui adds that the set-up can make a 0–360° azimuth scan and a 0–180° elevation scan continuously, with the practical scan range depending on the open view of lidar station. The spatial resolution is quoted as 50–100 m while the original sampling resolution is 10 m. "In the case of sea surface wind measurement, our lidar can make a scan every two minutes," Lui added.

The team tested its self-contained lidar during the 2007 Qingdao International regatta – the same location where the Olympic sailing events will take place – and results showed good agreement with both buoy and wind tower measurements.

Because the Doppler lidar can measure the wind with high spatial and temporal resolution, Lui and colleagues believe that it could also prove useful for aviation safety as well as traditional weather forecasting.