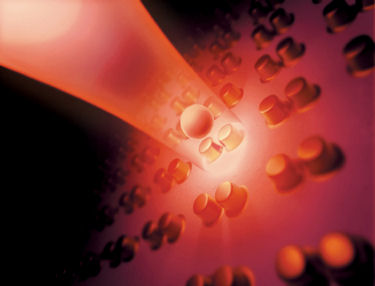 Researchers have made the first nano-optical tweezers that can trap and move objects on the nanoscale. Said to offer many advantages over traditional optical tweezers, the new technique could open the way to manipulating fragile biological cells and making structures from nanoscale building blocks (Nature Photonics 2 365).

Traditional optical tweezers, which have been around for decades, are one of the most important modern-day tools in biology, physics and chemistry. They work by trapping micron-scale objects near the focus of a laser beam. The technique allows objects to be picked up and moved to another place using just light.

Although scientists have used optical tweezers to trap nanoscale objects before, this required high laser powers, which can damage or even destroy the object in question. Now, Alexander Grigorenko and colleagues at the University of Manchester in the UK have made nanoscale optical tweezers that overcome this problem. The new devices have a much bigger trapping force and provide significantly smaller trapping volumes for much less laser power than employed in ordinary optical tweezers. 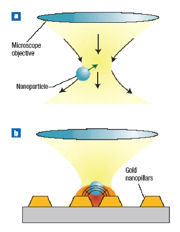 The secret behind the new device is that it exploits "virtual" photons to squeeze the trapping volume beyond the diffraction limit of the light being used. It also quenches Brownian motion of trapped nanoparticles by almost an order of magnitude compared to conventional optical tweezers operating under the same trapping conditions. Brownian motion is a common problem as particles get smaller, which makes them difficult to catch.

The nanotweezers are based on a nanostructured substrate comprising a regular array of nanopillar pairs. These are relatively easy to make using conventional electron-beam lithography. The gaps between the nanopillars effectively act as the tweezer traps.

The tweezers are "pretty simple" explains Grigorenko: an electron plasma of nanoparticles of the correct geometry generates virtual photons that can be packed into much smaller volumes and so generate much stronger forces on small particles trapped in the nanopillar gaps. The virtual photons (in the near field) are excited by a laser – just like ordinary photons.

Grigorenko says that he and his colleagues have succeeded in positioning a 200 nm diameter polystyrene bead near the surface of the double pillar array with a precision 10 times better than that possible with conventional optical lasers (measured at the same laser power).

Nanoengineering, nanophysics and nanobiology could all benefit from optical nanotweezers adds Grigorenko. One immediate application is in biosensing. "For example, nanotweezers can pick up a nanoparticle, deliver it to a desired place (to facilitate the act of measurement) and then bring it back to an initial pool," he told nanotechweb.org. "Measuring techniques like surface enhanced Raman measurements (SERS) could also be easily combined with nanotweezers."

The team is now working on optimizing its nanopillar structures for biophysics applications. "We are also keen on combining optical nanotrapping with Raman measurements and studying different aspects of many-particle manipulations using our nanostructured substrates," revealed Grigorenko.