optics.org catches up with the coordinator of OLLA, one of Europe's largest projects into white OLED technology that has drawn to a close this month. 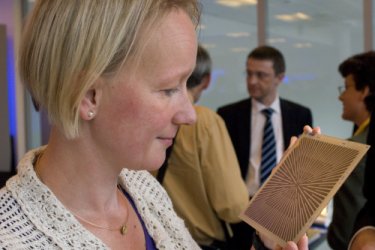 A European project called OLLA has shown that white OLED technology could one day be used in the general lighting market. At the end of the 45 month €20 million project, the partners have unveiled Europe's most efficient OLED lighting tile with an efficacy of 50.7 lm/W.

"OLEDs will be one of the next lighting technologies so a lot of research has to be done," OLLA project manager Peter Visser of Philips Lighting told optics.org. "OLLA was the first stepping stone. The goal was to show that OLED technology can be used for general white-light illumination and we demonstrated the basics."

Turning to specifics, OLLA's goal was to match the performance of an energy-saving light bulb: an efficacy of 50 lm/W and a lifetime of over 10,000 hours.

"Individually, the goals are not that difficult. To do everything in one device was more ambitious but we met our targets," said Visser. "The high efficiency combined with the extrapolated lifetime values prove that OLED is a serious technology for lighting applications, allowing innovative designs and energy savings."

The OLLA project brought together 24 partners from eight European countries, including industrial heavyweights such as Osram Opto Semiconductors, Novaled, Siemens and Philips. Thanks to an integrated approach, the partners have made key breakthroughs in many areas, including materials, deposition and light out-coupling.

In terms of materials, both small molecule and polymer OLED systems were studied. The final prototype tile is a small molecule source based on Novaled’s PIN OLED technology. Besides this, the OLLA team also delivered the first large-sized ITO-free OLEDs, the first large-area gravure printed OLED and several other ICT demonstrators.

"We did a lot of material research on both the emissive and supporting OLED layers," said Visser. "Our prototypes crossed all over Europe with partners trying out different layers and processes."

Visser adds that achieving a homogeneous output from the tile as well as maximizing the light output were equally important. "A metal grid on top of the tile ensures homogeneous light output," he explained. "We also pushed out-coupling methods to the limit and tried a number of solutions such as microlenses."

On the back of the success of OLLA, there are now several European projects looking into OLEDs. One of these is OLED100.eu, which is a three-year follow-on project from OLLA.

“Most of the OLLA device partners are again involved in OLED100.eu and we added the best European substrate manufacturers. The project should start later this year,” commented Visser. “This project will increase the efficiency, lifetime and size of OLEDs even further, and strives to get the costs below €100 a square metre. ”