Gaps in the coherence spectrum of diode lasers have been known to hinder research. Anselm Deninger and Thomas Renner look at how these gaps are being filled and the applications that are benefiting from access to previously unachievable linewidths and coherence lengths.

The ability to control the coherence properties of laser light is a major success factor in applications as diverse as spectroscopy, optical pumping of atoms, nonlinear frequency conversion, interferometry and laser-based imaging. The stumbling block for researchers however has been the gaps that exist in the coherence length spectrum of diode lasers.

Now, new electronic techniques for laser coherence control are filling the gaps and enabling the controlled manipulation of the linewidth and coherence length of diode lasers over 12 orders of magnitude from the micron range to hundreds of thousands of kilometres.

Linewidth and coherence
The term "coherence" is derived from the Latin verb cohaerere meaning to join together. A light wave is considered to be coherent if two joint parts of the wave exhibit interference. In laser physics, it is important to distinguish between spatial and temporal coherence. Spatial coherence denotes the distance between two points on a wave over which they still interfere with one another and governs factors such as the laser beam quality.

Temporal coherence, on the other hand, describes the ability of a wave to interfere with a time-shifted copy of itself. The time during which the phase of the wave changes by a significant amount (reducing the interference) is known as the coherence time. The corresponding propagation length during this time is called the coherence length. In this article, "coherence" only refers to the temporal coherence properties.

The larger the range of frequencies in any given wave, the faster the phase correlation is lost. In mathematical terms, the linewidth and the coherence length of a laser are inversely proportional and information about the laser's temporal coherence can be expressed in linewidth units of either megahertz or pm. When a laser has a Gaussian spectral distribution, the coherence length is given by approximately 132 m divided by the linewidth in megahertz, independent of the absolute laser wavelength.

Consider for example the emission spectrum of a violet diode laser emitting at 405 nm. Without any frequency stabilization, the spectrum has a width of approximately 0.5 nm or 900 GHz. From here, the coherence length is calculated to be around 150 µm, which is indeed observed.

If the diode laser is used in an external-cavity configuration, a diffraction grating narrows the diode's spectrum and the effect is dramatic: the typical linewidth is now 0.0005 pm or 1 MHz, and the coherence length is greater than 100 m. The grating effectively changes the coherence properties by almost six orders of magnitude.

Influences on the coherence length
The coherence length of an ideal (theoretical) laser can be derived from the Schawlow–Townes formula and is proportional to the output power divided by the square of the resonator bandwidth. In reality, this limit is usually not achieved due to the influence of various noise sources. If this noise is due primarily to spontaneous emission (quantum noise), then high intracavity power, long resonator length and low resonator losses will all increase the coherence length and, consequently, reduce the laser's linewidth.

In a real-world diode laser, the coherence is further influenced by drift factors and technical excess noise. Temperature drifts, environmental factors such as air pressure and humidity, and, in the case of external-cavity lasers piezo creep, all cause long-term drifts on timescales of seconds to hours.

On the other hand, current noise and acoustic perturbations influence the linewidth on a timescale of milliseconds or microseconds. Figure 1 summarizes the timescales on which various effects influence the coherence of a grating-stabilized diode laser.

Efficient coherence control must be performed on the correct timescale, or in other words, bandwidth is the key to linewidth narrowing and broadening concepts. The ability to apply high-frequency electric fields directly to the laser chip distinguishes diode lasers from other laser types, where a controlled coherence variation usually involves intricate external modulation schemes involving, for example, acousto-optic or electro-optic modulators. Table 1 lists typical coherence lengths for common laser types. 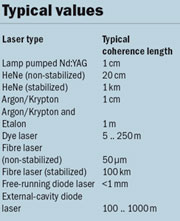 Operating regimes
Diode lasers can be operated in a variety of different configurations. Free-running diodes without any spectrally selective means are used in applications where spectral control is either not necessary at all, or comes second to a diffraction-limited beam. Examples include laser microscopy, flow cytometry, disc mastering and microlithography.

Grating-stabilized external-cavity geometries are used if single-frequency emission and spectral tunability are required. As outlined above, the gain in coherence due to spectral filtering by a grating can span up to six orders of magnitude. Unfortunately, this increase in coherence is usually paid for in terms of output power.

In the case of the industrially important wavelength of 405 nm, free-running diode lasers (such as the TOPTICA iBeam 405 shown in figure 2) are available with 110 mW output power, at sub-millimetre coherence lengths. Commercially available external-cavity lasers are spectrally narrow but optically limited to around 20 mW. Laser set-ups that unite both high power (up to 100 mW) and narrow linewidth (1 MHz) are possible, but require complex optical assemblies, like second harmonic generation in a resonant doubling cavity.

Narrowing the linewidth
Narrow laser linewidths are required in precision spectroscopy, quantum optics and metrology. So-called "forbidden" transitions between long-lived atomic energy levels have linewidths between a few tens of kilohertz and a few hertz. One noteworthy example is the 243 nm 1–2 s intercombination transition of hydrogen, which has a natural linewidth of 1.3 Hz. In order to match these narrow lineshapes, the laser linewidth must be several decades smaller than that of common external-cavity systems.

Narrowing a diode laser's output to these levels requires both ultrastable high-finesse reference cavities and extremely fast locking circuitry. TOPTICA's latest innovations are the fast analogue linewidth control module FALC 110 and its digital counterpart Digilock 110. These modules comprise a PID regulator with 10 MHz bandwidth, which controls the driver current of an external-cavity diode laser. A second, slower loop also cancels out long-term frequency drifts by acting on the grating piezo of the laser cavity.

Tests performed with researchers at the Max-Planck Institute for Quantum Optics in Garching, Germany, have reduced the linewidth of a 972 nm diode laser to 0.5 Hz using the FALC 110. In terms of coherence length, this corresponds to 264,000 km – two-thirds the distance to the moon.

Whilst linewidth narrowing techniques have traditionally been the backbone of TOPTICA's development of laser control electronics, a growing number of applications demand just the opposite: increasing the laser linewidth in a stable and reproducible way. Figure 3 shows the orders of coherence control that can now be achieved.

Broadening the linewidth
Tasks like molecular spectroscopy or optical pumping of Doppler-broadened gases are faced with absorption signatures several 100 MHz wide. Here, one prefers an artificially broadened laser linewidth, which has been virtually impossible to achieve with diode lasers: external-cavity systems are spectrally too narrow while free-running diodes are far too broad.

Recently, dedicated modulation sources such as TOPTICA's laser coherence control (LCC) unit have brought about the long searched for solution. The LCC employs a proprietary high-bandwidth current modulation scheme to increase the spectral line profile of an external-cavity or distributed feedback diode laser. Changing the amplitude of the modulation permits a precise adjustment of the laser linewidth. Whilst the minimum output (–33 dBm) hardly causes any measurable broadening at all, the maximum output (28 dBm) yields a laser linewidth well in the gigahertz range. The spectral profile of a diode laser can therefore be matched to a given absorption profile while the laser remains tuned to the resonance frequency. 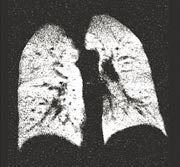 One intriguing application is magnetic resonance imaging of human lungs using spin-polarized Helium-3 gas (see figure 4). Helium-3, a stable isotope a million times rarer than "common" Helium-4, has a nuclear spin of ½ and carries a magnetic moment. Aligning the tiny nuclear magnets renders the gas magnetic, which enables in vivo imaging of human lungs and airways. This technique has been used to identify ventilation defects caused by smoking; to visualize gas inflow through the trachea and bronchi; and to measure oxygen concentrations within the lungs. Optical pumping is used to magnetize the gas and this process is most efficient when the laser linewidth matches the Doppler-broadened absorption profile of the gas. Here, the LCC module broadens the output of a 1083 nm distributed feedback laser to approximately 2 GHz.

At the far end of the scale, the spectral width of a diode laser is limited only by its gain profile. The spectrally broadest diodes – though admittedly not true lasers – are superluminescent LEDs (SLEDs). These sources offer a spectral width of up to 50 nm, which corresponds to a coherence length on the 10 µm scale.

SLEDs are used in applications such as optical coherence tomography (OCT), where an increase in spatial resolution is obtained by means of a low temporal coherence (and high spatial coherence). Even if this spectral width is not sufficient, a supercontinuum can be generated by ultrashort pulse lasers. Their spectral bandwidth of several hundred nanometres brings the coherence down to the 1 µm level.

The attainable coherence spectrum of semiconductor lasers now covers more than 12 orders of magnitude and has resulted in spectrally broad violet diodes and new records in frequency resolution. Applications ranging from laser-based imaging to precision studies of hydrogen transitions are now a reality. Optical and electronic feedback, short signal processing times and high operating bandwidths are the main tools that laser engineers resort to.