optics.org speaks to researchers in Japan who have created a femtosecond laser pacemaker.

Researchers in Japan have shown that a train of femtosecond laser pulses can cause heart muscle cells to contract and synchronize to the laser exposure. This optical pacemaker effect could provide crucial insights into abnormal heart rhythms and be combined with anti-fibrillation drugs to understand these effects at the cellular level. (Optics Express 16 8604)

"Calcium regulates the contraction of cardiomyocytes (heart muscle cells)," Nicholas Smith from Osaka University told optics.org. "We knew that if we could artificially perturb the calcium levels in the cell, we could control the beating and change its frequency. We used periodic femtosecond laser irradiation to synchronize the cell beat frequency and effectively create a laser pacemaker for the cells."

The team used a Ti:sapphire laser operating at 780 nm and emitting 80 fs pulses at a repetition rate of 82 MHz to stimulate the contraction. The optimal conditions were found to be average powers of between 15 and 30 mW and 8 ms exposures applied periodically at 1–2 Hz using a mechanical shutter.

The laser synchronization works by causing a transient leak from the cell's calcium stores. When the cells are cultured (in this case neonatal rat cardiomyocytes), the team introduces a fluorescent tag called Fluo-4, which it monitors using fluorescence microscopy to see the cells contracting.

Smith and his colleagues carried out over 200 experiments on single as well as groups of cardiomyocytes using different laser powers and periodicities. The synchronization of the cell contraction to the laser periodicity occurred in approximately 25% of all trials for average laser powers of between 15 and 30 mW. 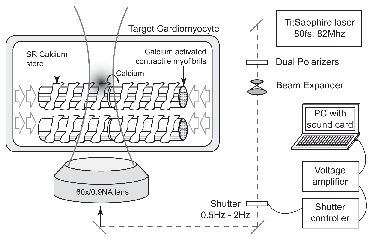 "The laser contractions are as strong as the spontaneous contractions without the laser," said Smith. "We did not expect that whole cell groups would so easily synchronize with the laser periodicity."

When the laser is switched off, the researchers say that the target cells continue contracting for around 64 seconds or 20 laser cycles. But when the laser is switched back on, the cell cannot contract because of the high intracellular calcium levels. "Short-term damage can be negligible for a range of laser powers but long-term degradation of cell health can and will occur," commented Smith.

There are now several avenues of research that the team is hoping to pursue. "We want to understand why not all target cells synchronize with laser and why it is so easy to use the laser as a pacemaker for a large group of cells," said Smith. "We could also use the technique to introduce new contraction periodicities into individual cells within heart tissue, or within a whole heart. We could then study how asynchronous contractions might propagate through the heart."