Touting its RGB backlight breakthrough at the Society for Information Display symposium, the German LED maker is thrilled at the prospects for wall-to-wall television. 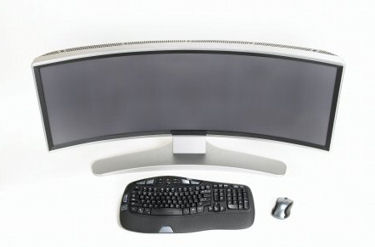 Using its state-of-the-art, high-efficiency chips, Osram Opto Semiconductors has launched two LED products that it is confident will increase its share of the backlighting market.

The German company debuted its RGB MicrosideLED and Ceramos products at the 2008 Society for Information Display (SID) symposium in Las Vegas, Nevada, on 20 May.

In particular, for the RGB MicrosideLED Osram claims an industry-leading high-efficiency green, that delivers 1000 mcd at 20 A. That comes at a power efficiency of 50 lm/W from a square, 0.3 mm-long chip and integrates into an overall package measuring only 5.0 x 1.4 x 0.6 mm.

"The MicrosideLED is very, very thin,” Osram's manager for LCD backlighting, Winfried Schwedler, told compoundsemiconductor.net. “There is no other design with this great green in such a thin package right now."

Targeted principally at laptops and mobile phones – particularly TV phones – the MicrosideLED offers particularly high colour gamut. According to the National Television System Committee, which combines brightness and chromaticity into a single measure, white LED backlights can reach about 70% of its standard gamut value. By contrast, RGB LED backlights can reach up to 125% of the standard.

Schwedler says that the RGB LEDs can deliver the same efficiency as phosphor-based LEDs in backlighting, but are likely to cost at least twice as much.

"It is also valued by the market, they want to go for it," Schwedler said. "Here at SID a very big LCD producer yesterday said 'I must talk to my general manager for mobile phones because this can be the breakthrough. I need it.' "

"This is really a breakthrough and should cut into the shares of other white LED producers."

Schwedler says uptake from consumer electronics manufacturers could see MicrosideLED being manufactured in volumes of tens of millions of units within six months.

Market explosion
Although the company's Ceramos LED is being designed into television backlights, its major focus on automotive displays means that it will be slower to reach large volumes.

The LED's durable ceramic packaging offers it a shelf-life advantage and means that it can be deployed in locations where it might be exposed to high temperatures, like on a sunny dashboard. The product uses a square, 0.5 mm long chip to shine 70 lm/W white light at 80 mA driving current.

Although the automotive industry demands more development time, Schwedler is still pleased by the status of 7-inch displays, which Ceramos is mainly destined for, at SID.

"100% of all displays below 10 inches are LED backlit at SID, and this is always an indicator of what we'll see in 1–2 years," Schwedler said.

Osram's final announcement from SID is its inclusion in the curved 42-inch Ostendo screen, which uses the company's Ostar LEDs for dynamic light projection. This is not the largest screen that Osram powers, with a 70-inch, $25,000 Sony LCD TV taking that official honour and a 103-inch prototype claiming the unofficial title.

Schwedler recognizes this large-size display backlighting as a key market for Osram, and is particularly pleased about its prospects in light of what he sees at SID.

"It's tremendous, its exploding, I'm so happy,” Schwedler said. “I'm just walking through the fair and smiling because the market is growing so fast."