Particles that are 'half-matter and half-light' could be used in optoelectronics devices. 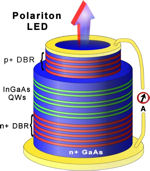 Researchers in Greece have taken an important step towards the creation of practical optoelectronic devices that use "polaritons" — quasiparticles that are part matter and part light. The team has made a polariton light emitting diode (LED) that works at near room temperature, rather than at the extremely low operating temperatures of previous polariton devices. What's more, the LED was made using conventional semiconductor technology and runs on a simple battery rather than being powered by a laser like its predecessors.

A polariton is a particle-like entity that can be used to describe how light interacts with semiconductors and other materials. It is an amalgam of two different ingredients: an electron-hole pair (or "exciton") and a photon, which is emitted when the electron and hole recombine. When a photon is emitted, it remains trapped in the material and creates another exciton, so the cycle is repeated. This continuous exchange of energy between photons and excitons can be described in terms of polariton states.

Now, Pavlos Savvidis of the University of Crete and colleagues have made diodes from gallium arsenide (GaAs) that emit light directly from such polariton states at temperatures of 235 K, which is around 60 K below room temperature. This is the first time that GaAs-based polariton devices have been operated at such high temperatures.

In the LED, which was fabricated using molecular beam epitaxy, photons are trapped in a microcavity that is created between two highly reflecting Bragg mirrors. Excitons are trapped in quantum wells placed at the two ends of the microcavity to enhance their coupling to the photons. Metal contacts are also formed at the bottom and on top of the device to inject electrons and holes respectively.

According to Savvidis, this demonstration of a polariton LED that operates at near room temperature "raises hopes" that polaritons could be used in a wide range of devices.

"Future polariton devices include polariton lasers, LEDs, amplifiers, switches and polarization modulators," said Savvidis. A particularly attractive feature of a polariton laser is that coherent monochromatic light is produced by the single lowest state of the system at the bottom of the polariton trap, he added. Here a Bose-Einstein condensate of polaritons is formed that requires no population inversion, as in a conventional solid-state laser, so the lasing threshold is reduced by several orders of magnitude. "This makes these lasers extremely promising as ultra-low threshold lasers, or as low-power sources of coherent and non-classical light."

In general, polariton devices will have very low power consumption and be ultrafast, he added. They could also be assembled in parallel into large matrices of thousands of devices each, which would dramatically reduce the cost per device.

According to the researchers, there is no fundamental reason why the devices should not work at temperatures even closer to room temperature and their next goal is to make such a device.

The new LED is a step further towards fulfilling the promise of room-temperature, electrically driven polariton devices, writes Benoît Deveaud-Plédran of the Ecole Polytechnique Fédérale de Laussane, Switzerland, in a related article (Nature 453 297).