Optically pumped semiconductor laser technology enables scaling of output power and wavelength throughout the visible and near-infrared regions of the spectrum. Matthias Schulze and Andrew Masters of Coherent look at the applications benefiting from these tailor-made wavelengths.

Optically pumped semiconductor lasers (OPSLs) are unique among solid-state, continuous-wave laser technologies in terms of their wide output power and wavelength scalability. As a result, they can be tailored precisely to the needs of specific applications. OPSLs also have several advantages over older technologies, including fast direct pulsing, small footprint, low power consumption and automated manufacturability – with costs that scale with volume. This article examines how these key benefits are being utilized in several disparate applications. 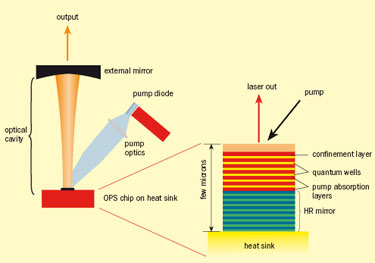 OPSL background
In an OPSL, a large-area vertical-cavity surface-emitting laser (VCSEL) is pumped by one or more diodes or diode arrays (see figure 1). The OPSL's output wavelength is determined by the characteristics of the quantum wells in the VCSEL structure, which can be optimized for any wavelength in the near-infrared. Efficient intra-cavity doubling then enables the final output wavelength to be set anywhere throughout the visible spectrum.

A significant advantage of OPSL technology is that a VCSEL has a broad absorption bandwidth, unlike crystalline materials such as Nd:YAG or Nd:YVO4. This relaxes the specification on the pump diode wavelength substantially, which in turn reduces diode cost and eliminates the requirement for tight temperature control. This is a major reason for the power limitation in diode-pumped solid-state (DPSS) lasers, for example.

Power is scaled by increasing either the output power of the diodes or the number of diodes. It is worth noting that since the near co-linear OPSL cavity design can support several pump diodes, the final OPSL output power can be scaled to tens of watts in a compact package. Moreover, power scaling does not cause beam-quality problems due to thermal lasing in the gain medium, as is the case with lasers based on rod-shaped crystals.

OPSL technology is simpler to assemble than earlier laser technologies and does not involve the manual adjustment typically required when building DPSS or other lasers. OPSLs lend themselves to automated, robotic production methods with their related economies of scale and high unit-to-unit consistency.

The limited wavelength options and lack of high volume, low-cost production capabilities have been widely recognized as barriers to the use of visible lasers in consumer applications, such as televisions. As one indicator of their future potential, Coherent recently signed a licensing agreement with Osram to enable the latter to exploit OPSL technology for consumer display applications.

A more subtle benefit of OPSLs occurs because the active laser medium is a semiconductor with no effective excited state lifetime. This allows an OPSL to be directly modulated at high (up to 100 kHz) pulse repetition rates with no need for an internal or external modulator.

488 nm for biomedical applications
Biomedical instruments are already benefiting from OPSLs. For example, 488 nm OPSLs with tens or hundreds of milliwatts of output power are being used for laser-induced fluorescence excitation in instruments such as flow cytometers, DNA sequencers, confocal microscopes and even to interrogate lab-on-a-chip systems being used for proteomic research.

The success of the OPSL in biomedical applications has been dramatic, with over 10,000 of the 488 nm lasers now in use, mostly in OEM instrumentation. This is primarily because the only field-proven competitive source at 488 nm is the air-cooled ion laser, which formerly dominated these applications.

The use of miniaturized OPSLs has enabled simpler, smaller instruments with greater reliability, higher performance, lower power consumption, simpler optics and smaller thermal budgets. To put this into perspective, the OPSL is so much smaller than an air-cooled ion laser that it can be placed at or near the interaction zone in these instruments. Not only does this eliminate the cost, complexity and space associated with multiple beam delivery optics, it also removes all of the vibrations and air flow resulting from the forced-air cooling used in ion lasers. In addition, OPSLs simplify assembly for instrument OEMs because of their superior unit-to-unit consistency.

In the past year, biomedical fluorescence applications have also started to benefit from the "wavelength-on-demand" aspect of OPSL technology. Specifically, Coherent has developed an OPSL emitting at 505 nm, which simultaneously excites a set of fluorophores that previously required both 488 and 514 nm. In essence, two ion-laser wavelengths can now be replaced by a single compact OPSL.

532 nm for forensic applications
Forensics is an application that typically used DPSS lasers, but desired the smaller size and lower cost of OPSLs. Forensic light sources are used at crime-scene investigations and in crime labs to identify trace evidence, such as latent fingerprints and bodily fluids. It is now widely accepted in the forensics community that just a few watts of blue or green laser illumination and an orange/red (around 580 nm) viewing filter provides markedly superior detection to the traditional filtered lamp (alternative light source [ALS]) rated at several hundreds of watts.

The ALS is still commonly used because of practical limitations with older laser technology, most notably high cost and lack of portability due to weight and special electrical power requirements. Portability is crucial in evidence detection because most crime scenes degrade over time, particularly in exposed or highly trafficked locations, or where evidence is chemically or physically unstable.

Originally the domain of argon-ion lasers at 514 nm, the introduction of DPSS technology expanded the use of lasers in forensics, with limited portability allowing some work at the crime scene. However, the high cost (up to US$140,000/€92,000) of DPSS lasers prohibited their use in many police and fire departments, except those located in large cities or those associated with well-funded organizations, such as military crime labs.

To better support this application, Coherent introduced a 5 W 532 nm OPSL called the TracER in 2006. In our opinion, this is the first forensic laser to be price-competitive to the ALS. The compact system is fully portable and can be operated from a conventional 110/220 V supply or an integrated laptop-type battery for 90 minutes. The operator can switch between battery and AC power without any disruption to laser operation, and the battery can even be charged from a car's cigarette lighter on the way to a crime scene. The use of solid-state semiconductor components provides tens of thousands of hours of operation without the need for adjustments, service or expensive consumables.

The superiority of laser illumination in this application manifests itself in the ability to detect trace evidence that would otherwise be missed by an ALS, even in the hands of a highly trained technician. Typical examples include a red fibre on a red carpet or a fingerprint on aluminium foil (see figure 2).

577 nm for photocoagulation and laser light shows
While the legacy wavelength applications discussed above emphasize some of the practical advantages of OPSL technology, it is the recent development of multi-watt lasers at totally new wavelengths that highlights the mind-shift enabled by OPSLs.

A primary example is laser photocoagulation for treating wet-form age-related macular degeneration (AMD), a leading cause of blindness. Early-stage wet AMD can be treated by lasers in two possible ways. When the problem blood vessels are grouped behind the fovea (yellow spot), a type of photodynamic therapy is preferred. Alternatively, when the blood vessels are outside the fovea and are leaking blood into the eye, photocoagulation is usually the recommended treatment. In the latter case, the laser produces controlled, local cauterization that destroys the culprit vessels and prevents further bleeding.

The key to successful photocoagulation is tissue selectivity: closing the target vessels without damaging the surrounding tissue in any way. The best way to differentiate between the leaking vessel and other tissue is to use a laser wavelength that is preferentially absorbed by blood. The laser wavelength must also be visible so that it passes benignly through the transparent front of the eye.

The main component of blood with visible absorption is oxyhaemoglobin. Until recently, the most commonly used laser wavelength was 532 nm because it is close to an absorption peak but the absorption of oxyhaemoglobin actually peaks at 577 nm (see figure 3).

Coherent has designed a new OPSL for this application (the OPSL-577-3) which delivers 3 W of output power at 577 nm. At a very minimum, this improves vessel closure with reduced thermal loading on the eye but beyond this important benefit, the fast-pulsing (up to 100 kHz) capabilities of OPSLs are helping researchers to improve photocoagulation treatment further. Specifically, the use of "micropulsing" provides extreme dosing control that may enable laser treatment to initiate a wound-healing response without causing any trauma. In the early stage of investigation for photocoagulation, this micropulsing is analogous to the Fraxel cosmetic pulsed laser treatment used to stimulate new collagen deposition beneath the skin without damaging the skin itself. Fraxel is a registered trademark of Reliant Technologies.

As often happens, a new laser wavelength can serve multiple applications and this has already proved true for the 577 nm yellow OPSL. Laser light shows and displays have needed a true yellow in order to expand the colour gamut that can be generated. Coherent's 3 W laser is now being incorporated into full-colour light-show engines (together with 488, 532, and 638 nm laser systems) to produce a colour gamut that is 150% better than today's standard format.

Conclusion
The history of the laser industry is characterized by landmark technical revolutions followed by evolutionary enhancements to that technology. There is general agreement that the most important technical revolution of the last 20 years was the development of solid-state alternatives (such as diodes, DPSS lasers) to the venerable gas lasers of the 1960s. The authors believe that the commercial development of OPSLs may prove to be a breakthrough of similar importance for visible laser applications.

• This article originally appeared in the April 2008 issue of Optics & Laser Europe magazine.