A new production line designed for development work and short production runs of speciality films will support a range of European projects. 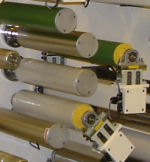 A precision coating line that has been commissioned at Microsharp's UK facility is intended to support the company's R&D activities in OLEDs and solar energy, and will also be made available to external companies for pre-production testing.

"The machine is small scale and flexible, ideally suited for development work," Microsharp's David Brogden told optics.org. "At present the majority of production capacity for this type of product is very large scale and in the far east."

Microsharp is a developer of optical films, integrated display screens, and optical modules in the areas of displays, security, illumination and renewable energy. Some of the early development projects for which the production line will be used include optical out-couplings for OLEDs, Fresnel lens structures for solar concentrators, and production of nanostructured, self cleaning films.

"Microsharp is also the only UK company involved in OLED100, an EU-funded €20 million project to develop a commercially viable OLED technology for the European lighting industry," Brogden noted. "We will develop out-coupling films which are essential to efficiently extract the light generated from the OLED."

The additional R&D resources provided by the new line are expected to play a significant role in the development of a number of specialist optical structures, according to the company. "The equipment is specifically designed to be used for product development trials and short production runs, significantly increasing our speed to market for new innovations." said Nick Walker, Microsharp CEO. "The facility will also be made available to clients on a lease basis for testing and pre-production trials of new films and clients' own production jobs."