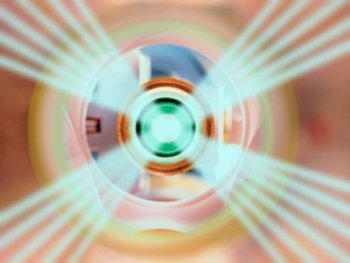 In the first, Thomas Dekorsy of the Center of Applied Photonics at the University of Konstanz has worked with scientists at Trumpf to demonstrate a pulsed solid-state disk laser with an average output power of up to 54 W at a repetition rate of 3.8 MHz. With pulse energies of up to 16 µJ at a pulse duration of 1.36 ps, Dekorsy says that the 1030 nm laser "outperforms previous results obtained from oscillators operated in air by an order of magnitude".

The second result relates to a semiconductor disk laser that produces continuous-wave output at 2 µm, which is ideal for applications such as LIDAR, pollution monitoring and medical diagnosis. The laser, which was designed and fabricated under the EU-funded VERTIGO consortium, which includes the Institute of Photonics at The University of Strathclyde and the Fraunhofer Institute for Applied Solid State Physics in Freiburg, Germany, produces an impressive 5 W of output power with excellent beam quality.

Pulsed laser hits higher energies
The high pulse energies demonstrated by Dekorsy and colleagues were achieved not by increasing the length of the cavity, but by repeatedly passing the laser beam through the Yb:YAG gain medium.

"Our results are the highest pulse energies produced directly from such an oscillator," Dekorsy told optics.org. "High pulse energies can also be obtained from cavity-dumped solid-state lasers or laser oscillator–amplifier combinations, but these usually work at much lower [kilohertz] repetition rates."

The new laser, which was fabricated in a project supported by the German Federal Ministry of Education and Research, exploits an active multipass geometry that sends the pump light through the disk up to 20 times in a single round trip. This vastly increased the round-trip gain and also enhanced the output coupling to around 60%. The laser operates at 1030 nm, but Dekorsy and colleagues also showed that the output could be frequency doubled to 515 nm with an efficiency of 60%.

According to Dekorsy, still higher pulse energies could be achieved by combining the active multipass cell with a passive design that uses mirrors to extend the cavity length. "The efficiency can also be increased by using more than 20 passes of the pump light over the thin disk, such that all of the pump light is absorbed," he said. "At the moment, roughly 65% of the pump light is being absorbed."

Commercialization of the technology is also being considered, says Dekorsy. "Trumpf's ultrafast TruMicro 5000 series produces several hundreds of microjoules in a perfect beam based on regenerative amplification. Users interested in testing such high average power at kilohertz or megahertz repetition rates may contact Sascha Weiler at Trumpf [sascha.weiler@de.TRUMPF-Laser.com]."

Semiconductor disk laser sets power record
Meanwhile, the disk laser demonstrated by John-Mark Hopkins and colleagues exploits a semiconductor structure made from an antimonide-based material system, (AlGaIn)(AsSb). Edge-emitting diode lasers based on this material system have been demonstrated at 2.0–2.7 µm, but they lack the beam quality needed for applications such as atmospheric lidar that require a high-brightness source.

According to Hopkins, three factors were critical to achieving the 5 W figure at 2 µm: high material quality; a properly calibrated growth process; and, most importantly, an intracavity heat spreader made from diamond that takes heat away from the active region. Such effective heat dissipation means that greater output powers can be achieved before the laser reaches its optimum performance conditions.

The only other laser to produce such high-power output at these wavelengths are doped-dielectric solid-state lasers, such as thulium-doped fibre lasers, but these cost tens of thousands of pounds.

"Typically solid-state lasers are far less tunable than disk lasers and can be noisy due to long upper state lifetimes," said Hopkins. "In contrast, semiconductor disk lasers can be designed to hit a specific wavelength, and can be tunable, stable and enable low-noise operation."

In the current design, the beam quality parameter, M2, was measured at 1.06 for an output power of 1.2 W. Increasing the pump power without altering the cavity length yielded M2 values of 1.5 at 1.7 W and 2.6 at 2.4 W, but Hopkins believes that these values could be improved by optimizing the cavity design. "Optimizing the semiconductor structure for even higher output powers is one of the strands of our future research."

The VERTIGO consortium also plans to produce more rugged devices in preparation for building prototypes for different applications, and to develop other modes of operation – such as producing stable, single-wavelength output.