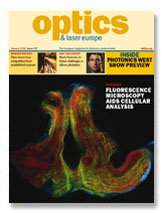 SPIE's Photonics West will draw an international crowd to San Jose in California, 19–24 January, for a wide range of conferences, exhibitions and professional development sessions.

The solar market has been growing at an annual growth rate of between 40 and 50% since 1990 and is a $12 bn business today. OLE speaks to Steve Eglash about investment trends and emerging technologies.

Momentum is building in the quantum cryptography market. Jacqueline Hewett speaks to Leonard Widmer and Alexis Rochas of Swiss firm id Quantique about real-world applications and new product releases at Photonics West that will widen the technique's reach.

Emcore has been winning multimillion dollar contracts for its terrestrial solar cells, modules and systems. Photovoltaics vice-president David Danzilio talks to Richard Stevenson about these successes and the company's progress in making products for space applications.

This issue sees the first instalment of a new section in OLE, called 'Ask the expert'. Each month, this feature will provide an insight into a significant field of optics by asking a key expert on the subject for a back-to-basics introduction. First up, silicon photonics.

Recent technological advances in conjunction with major developments in fluorescent markers have made fluorescence microscopy an extremely powerful tool. René Hessling and Thorsten Kues of Carl Zeiss MicroImaging look at the techniques that are allowing researchers to study the structures within live cells in ever greater detail.

Using a laser to manipulate cells on a silicon substrate could be the stepping stone towards medical applications such as drug screening. Marie Freebody finds out how Matthew Lang and David Appleyard overcame the challenges of trapping on and through silicon wafers.

Fibre lasers have gained market share in applications where they have a distinct advantage over established laser technology. But as Tom Hausken of market analyst Strategies Unlimited tells OLE, moving into areas where the cost or performance advantage is not so obvious is the new and difficult challenge facing fibre-laser developers.