US scientists have unveiled a centimetre-sized silicon chip that can regenerate optical signals transmitted through an optical fiber.

Maintaining the integrity of optical signals as they travel through optical fiber is crucial for modern telecommunications networks. Dispersive and nonlinear effects degrade optical signals during transmission, with the result that it can become difficult to distinguish between the logical '1's and '0's in the data stream – making it more likely that an error will occur.

The solution in today's networks is to deploy signal regenerators at regular intervals along the fiber, usually based on circuits that convert the data signal to electronics, clean it up, and change it back into the optical domain. Although cheap and easy to deploy, these systems tend to limit the maximum data rate on the link and need replacing when the system is upgraded to higher data rates.

Now, a research team led by Alexander Gaeta of Cornell University has produced an all-optical regenerator on a silicon chip. This device avoids the need for optical-electronic-optical (OEO) conversion, and also offers a more compact solution than alternative all-optical technologies.

"Other research groups have achieved the same functionality using optical fibers and semiconductor optical amplifiers," Reza Salem, a post-doctoral researcher in Gaeta's group, told optics.org. "But to the best of our knowledge, these capabilities have not been demonstrated using silicon photonics before."

According to Salem, the chip acts a multi-purpose tool than can correct for a number of different problems, although not necessarily all at the same time. "A wave travelling through an optical fiber can encounter different kinds of distortions, and we designed a system that can fix most of them," he said.

For example, if the signal suffers from a low extinction ratio – in other words, the power levels representing logic '1's and logic '0's are too close together – the chip can optimize the power levels and provide some pulse compression that compensates for dispersive broadening. And if the signals are slightly offset from their initial timing, a second setup removes some of the timing jitter while also reshaping the pulses. "We have different configurations, and each has a specific purpose," explained Salem.

The chip exploits a nonlinear optical process called four-wave mixing (FWM). In FWM, three wavelengths interact in a nonlinear medium – in this case silicon – to generate a fourth wavelength. By mixing the incoming signal with a continuous wave signal or a clock input, an output with improved shape and timing characteristics is obtained.

The non-linear interaction takes place in a silicon waveguide that is 1.8 cm long, with a 300 nm x 500 nm rectangular cross-section, buried in a silicon dioxide cladding. "It is designed to work with near-infrared (1500 nm) signals, and the dimensions allow for efficient conversion over a wavelength range of more than 50 nm," said Salem. 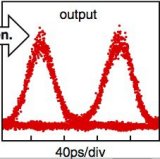 Silicon is a good medium for nonlinear optical processing, because at 1550 nm the nonlinear component of its refractive index is almost 200 times that of glass. In addition, the high refractive index contrast between the silicon core and the silica cladding allows for tight confinement of the light, enhancing the nonlinear response. "We were able to exploit these two properties to regenerate the input signals using very little power," said Salem.

According to the team, the chip could be used in virtually all sections of a communications link. It could fine-tune modulated signals at the transmitter, boost and regenerate signals mid-way along a transmission line, and remove timing errors from an incoming signal at the receiver. "Its design allows for the manipulation of optical signals without the need for an intermediate electronic circuit, potentially allowing it to work at speeds in the order of terabits per second," Salem added.

The ultimate goal will be to integrate a number of functions, including amplification, reshaping, and regeneration, onto a single chip, but so far Gaeta's team has focused on achieving each of these functionalities on separate chips. "Earlier last year, we built a broadband light amplifier on a single silicon chip," said Gaeta. "As a means to demonstrate that chip, we began working on a variety of applications - one of which culminated in this signal regenerator."

In addition to communication networks, the Cornell group wants to use the chip to make highly sensitive oscilloscopes that can peer at signals with picosecond lifetimes. Their results were published in Nature Photonics.