Inspired by the way a carnivorous plant captures insects, US scientists have designed a new material that could facilitate high-speed adaptive optics. 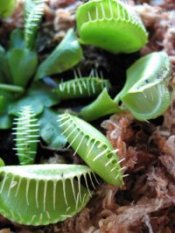 “We got the inspiration to build this material from way a Venus flytrap works,” Alfred Crosby, an assistant professor at the University of Massachusetts at Amherst, explained to optics.org. “This plant can change the shape of its lobes from concave to convex at very high speeds – around 100 ms.”

The new material consists of a number of lens-shaped patterns fabricated on a silicon substrate. Each individual element looks like a hemispherical shell, which can be in either a concave or convex orientation. Like the flytrap, the lenses in the material can switch between convex and concave orientations at speeds of around 30 ms.

Such high-speed transitions are made possible by a phenomenon called "snap buckling instability". When the pressure applied on a curved surface exceeds a certain threshold, it changes the orientation from a convex to a concave shape, or vice versa.

“It’s like taking a tennis ball and cutting it into two pieces,” says Crosby. “If you place one half between two vertical stands, and start pushing the bulge, the ball changes shape and begins to deform. Then at one critical point, it stops deforming and changes to a convex shape.”

The curved surfaces in the new material react in the same way, but in this case the stimulus can come in the form of pressure, heat or an electrical current. In their first prototype, the team used a fluid-derived swelling to demonstrate the rapid transition.

When the individual lenses change shape, the surface as a whole undergoes a transition that modifies its reflectivity or its focal length. This means that the material could be used in outdoor signs where the reflectivity of the surface keeps changing, and also as an adaptive lens with a variable focal length. 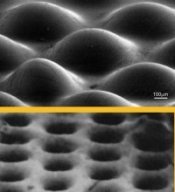 Micrographs of the new material

According to Crosby, each lens in the surface can be fabricated in various shapes and sizes. In this work, the team built hemispherical lenses with diameters ranging from 50 µm to 500 µm, with an inter-lens spacing of 10–50 µm. Crosby and his team found that as the lenses got smaller, the transition speeds went up.

Hongrui Jiang of the University of Wisconsin, who last year produced a liquid lens that mimics the human eye, commented: “This work takes a biomimetic approach to realizing snapping polymer membranes triggered by environmental parameters. It could potentially be applied in arrays of on/off operating devices, such as optical switches and as actuators that control other components.” Jiang added that the fabrication process must now be improved to produce lenses with highly uniform shapes and smoother textures.

The Massachusetts team is now working on a nanoscale version of the material, which could be used in adhesives and paints. “We are also looking to trigger the transitions with voltage changes instead of fluid-derived swelling,” said Crosby. “Such a feature would be most useful for optical devices.”

About the Venus flytrap

The Venus flytrap is a carnivorous plant that is found in Eastern United States. Writing about it in his diaries, Charles Darwin called it “one of the most amazing in the world”, because of the incredible speed at which it traps insects.

From the outside, it has green coloured leaves that terminate with lobes that look like two palms attached at the knuckles. In this sense, they can be thought of as concave. When an insect or fly sits on its inner surface, the lobes change to a convex shape, instantly sealing the insect inside. The reaction time is estimated to be about 100 ms – one of the fastest movements in the plant kingdom.