Scientists have used near-infrared fluorescence microscopy to image carbon nanotubes inside a living organism for the first time.

Bruce Weisman and colleagues at Rice University used the imaging technique to detect carbon nanotubes inside fruit fly larvae. The team hopes that its technique may eventually be used to detect tumours in human cancer patients.

"Since the discovery in Bruce Weisman's lab that nanotubes fluoresce in the infrared, we have hoped that this fluorescence could be used as an imaging tool in whole organisms," team member Kathleen Beckingham told nanotechweb.org. "Our demonstration that nanotubes can be imaged in vivo in Drosophila by their infrared fluorescence is the first evidence that this is a realizable goal." 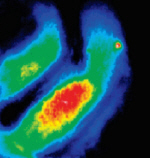 The Rice researchers achieved their result by introducing nanotubes into fruit fly larvae by feeding them on food laced with the nanomaterials. Next, they imaged the nanotubes in the living organisms using a camera inside a custom-designed infrared microscope and compared the images with a control group of flies that had not been fed nanotubes.

"The most important finding is that the ability of the nanotubes to emit near-infrared light at specific wavelengths persisted within the interior environment of the living organism," explains Beckingham. "Although only about one in 100 million nanotubes passed through the gut wall and entered the flies' organs, we were able to detect these miniscule quantities of nanotubes in other tissues. Indeed, single nanotubes were detected and characterized in brain tissue isolated from the larvae."

The highest concentration of nanotubes was found in the dorsal vessel, which is analogous to a main blood vessel in a mammal. Fewer nanotubes were found in the brain, ventral nerve cord, salivary glands, trachea and fat. "The fact that nanotubes can be imaged in this way in one living multicellular organism is a very strong predictor that similar imaging will be possible in humans or other animal species," states Beckingham.

The researchers hope to target nanotubes to tiny, otherwise undetectable secondary tumours in human cancer patients and then be able to find these tumours using the infrared fluorescence from the nanotubes. Beckingham says that she and her colleagues are now focusing on techniques for targeting nanotubes to particular cell types in intact organisms. "We are again using Drosophila since it is an easy to use model organism and the wealth of genetic and molecular knowledge of this organism permits experiments not possible in other systems."