Building on their previous development of a hybrid InP/silicon laser structure, researchers from Intel and the University of California, Santa Barbara, demonstrate a similar device with pulse characteristics suitable for ultrafast optical communications.

The hybrid silicon laser revealed last year by a team out of Intel and the University of California, Santa Barbara (UCSB), is now suitable for applications in high-speed optical communications.

Led by USCB's John Bowers, the collaboration has fabricated mode-locked devices, in other words lasers that produce ultrashort pulses at a very high repetition rate. 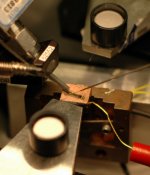 The advance means that lasers based on a silicon manufacturing platform, similar to that used in volume CMOS processing, are one step closer to becoming a commercial reality – and that the Intel/UCSB hybrid approach is the most promising.

The basic laser structure is the same as that demonstrated last year (see related stories), in that an InP wafer containing the laser's active element is bonded to a silicon wafer, using an oxide plasma-assisted bonding step.

When driven electrically, the InP portion emits light at around 1600 nm, and the silicon portion acts like a waveguide, amplifying the light and creating laser action. In the latest design, the team has improved the laser's efficiency via a hydrogen implantation step that confines the flow of electric current between the laser's electrical contacts to a smaller region above the waveguide.

Brian Koch, one of the UCSB researchers, explained: "What's nice about our technique is that when we put the InP on the silicon waveguide, we don’t need to align it accurately, which makes the process relatively easy."

"To make a mode-locked laser, we altered the design slightly by adding a new section to the laser cavity. This section is called a saturable absorber, and its function is to absorb some of the light generated."

The change in design means that, instead of emitting a continuous stream of infrared light, the hybrid laser is forced to pulse very quickly. When the laser is turned on, the saturable absorber begins to absorb light, extinguishing the emission after just a few picoseconds. An RF signal applied to the saturable absorber section of the laser controls the on-off pulse cycle.

The design works so well that it produces light pulses just 4 ps long, at a repetition rate of up to 40 GHz, with a regular time interval in between those pulses. 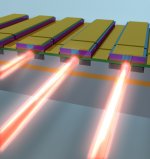 For applications in optical communications, these pulse characteristics are hugely important, since this is how information is encoded before it is sent down an optical fiber.

Aside from conventional optical communications, the hybrid laser could find a more futuristic application as a photonic interconnect – capable of delivering much speedier chip-to-chip communication than is possible with current interconnect technology. This is seen as a key technological challenge by developers of computer architectures, since conventional interconnects are now approaching physical limitations.