Diffractive optical elements known as photon sieves could be ideal for use in future large lightweight telescopes for space applications, say researchers at the US Air Force Academy. The photon sieve would act as a primary - a large element capable of gathering and focusing light using diffraction. (Applied Optics 46 3706) 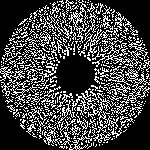 "Currently, there is no way to create telescope primaries of 20 to 100 m in diameter in space," Geoff Andersen from the Air Force's Laser and Optics Research Center told optics.org. "A photon sieve is simple to create. All you need to do is make the holes of the correct size and location. This is more of a straightforward engineering problem rather than the complicated issue of fitting a multitude of segments together in orbit."

A photon sieve is based on a Fresnel zone plate, which contains concentric bright and dark rings. In a conventional photon sieve, the holes are centred on the bright zones. Andersen's photon sieve however achieves the same optical performance by positioning larger "antiholes" on dark regions, which makes the component easier to fabricate. 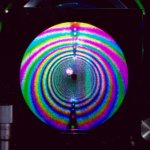 To test their ideas, Andersen and colleagues designed an antihole photon sieve containing five million holes randomly placed on the dark rings and ranging in diameter from 19 to 331 microns. The component had a focal length of 1.0 m, a diameter of 0.1 m and operated at 532 nm. The team used electron-beam lithography to fabricate the photon sieve on a chrome-plated 125 mm, 2.4 mm thick quartz plate.

"The random arrangement reduces diffraction spikes in the far-field and I wanted to get a good fill factor to get the largest light throughput," explained Andersen. "The random positions create a more evenly distributed background illumination around the focal plane."

As the photon sieve is a diffractive element, it suffers from dispersion. The team found that its initial device had a bandwidth of just 0.06 nm. To obtain a useful bandwidth, a corrective system including a second dispersive element was built and increased the bandwidth to 40 nm.

Although five million seems like a large number of holes, this would have to be increased substantially for space-based telescopes. "Ultimately, a 20 m aperture would require trillions of holes," said Andersen. "This may seem like a lot, but it is simply a computing issue. Once made, deployment and operation in space is relatively simple."

Andersen adds that the distribution of the holes can also be tailored for applications such as planet detection using a technique called apodization. "Apodization is trivial with a photon sieve in comparison with conventional primaries," he commented.

The team is now working to create membrane versions of its devices. "As long as the membrane is flat and the holes are correctly sized and positioned, diffraction limited imaging is easily obtainable," concluded Andersen. "It turns out that surface variations as large as 100 microns can be accommodated."