Lumileds rolls out the Rebels

Based on both InGaN and AlInGaP semiconductor materials, the Rebel LEDs feature Lumileds' latest chip technologies. Available in a wide range of colors – from various whites to royal blue, green, red and amber – the Rebels have been designed with solid-state lighting in mind. 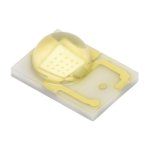 The rebel is here

"Luxeon Rebel will cause a rapid change in the solid-state lighting design," predicted David Eastley from the San Jose, CA, chip manufacturing company.

Crucially, the new products include "warm-white" and so-called "neutral-white" emitters, essentially white sources with a lower color temperature than most previous power LEDs. These "warmer" hues are important as they imitate the color of traditional incandescent lamps, and are therefore preferable for interior residential lighting applications.

Lumileds claims that all the chips in the Rebel family are engineered to operate between 350 mA and 1 A, with the cool-white emitter offering the highest efficacy of over 70 lm/W.

In its technical data sheet (see related link), Lumileds only quotes typical lumen output performance at 350 mA and 700 mA, however.

At the lower drive current, the cool-white chips emit a minimum of 80 lm, equating to a luminous efficacy of approximately 73 lm/W. Under a drive current of 750 mA, the luminous flux increases to a "typical" value of 145 lm, with the efficacy dropping to approximately 61 lm/W.

If higher total light output is desired, the cool-white chip is said to deliver more than 160 lm at a high drive current.

Lumileds has already stockpiled plenty of the Rebels with its distribution partner Future Lighting Solutions, although the warm-white and neutral-white LEDs have only just become available for sampling. Volume production of these two important chips is slated to begin some time later this year.

The new chips from Lumileds will be up against some stiff competition in the solid-state lighting sector from traditional rivals like Cree and Nichia. Cree already has XLamp products with a similar performance to the Rebel in volume production, while Nichia is expected to launch a lighting-class power LED later this year.

Cree says that its XR-E chips, which are being used in solar-powered streetlights in China, also deliver "up to" 80 lm of cool white light when driven at 350 mA, and 65 lm of warm-white at the same drive current.

In its product specifications, Cree also quotes a typical luminous flux of 136 lm at the higher drive current of 700 mA for the cool-white XR-E chips, dropping to 100 lm for warm-white emission.

Cree's cool-white XR-E is also said to have a typical flux of 176 lm at a 1 A drive current, although no figure is given for warm-white at this level.

And as recently as last week - perhaps pre-empting the Rebel release - Cree added that its new XLamp products represented the first "lighting-class" warm-white LED sources, as they were able to deliver up to 124 lm when driven at 700 mA.