• Dynasil has announced results of operations for the quarter ended December 31, 2006. Its range includes optical materials, components, coatings and specialized sub-systems, optical blanks from synthetic fused silica. Through its subsidiary, Optometrics it supplies of optical components including diffraction gratings, filters, laser optics, and monochromators worldwide. Revenues for the quarter totaled $2.5 million, an increase of 64% on the same quarter in 2005. Net profit was steady at $23,000. Revenues for Dyansil's historical businesses were up 22% and income was up 411%, from $25,000 to $130,000, compared to Q4 05.

• BASF Venture Capital is investing in DataLase a developer of printing technologies that use a laser to create images for product identification on packaging. DataLase has raised £4.9 million in its Series B financing round, of which BASF VC is providing £1 million (€1.5 million). DataLase will use the funds to expand its marketing and sales activities in the US, in R&D and product development.

• RedShift Systems has appointed Armstrong Optical as its distributor for the UK and Ireland. Based on its developments spun-out from the telecommunications industry, RedShift is establishing itself in the field of thermal imaging with its Thermal Light Valve technology. The RedShift 1160 is a long wavelength infrared camera engine designed to provide OEMs with an affordable thermal camera.

• Morgan Advanced Ceramics, has secured a contract with Photek to supply hexagonal ceramic insulators for intensifiers used in NASA's OWL mission. OWL is the world's first earth-orbiting system designed to study air showers initiated by ultrahigh-energy cosmic rays (UHECR). The use of ceramic in the OWL's 'eyes' will allow an accurate image of these particles to be generated and will enable scientists to explore their origins.

• Laser Lines has announced a new distribution agreement with Swiss-based Lasag, which manufactures industrial Nd:YAG lasers for materials processing. Laser Lines is to provide sales and support for Lasag's products in the UK and Ireland. The lasers are primarily used for precision cutting, welding and drilling of metals and other materials.

• ColorChip, a manufacturer of glass- based planar lightwave circuit chips and modules for FTTH networks, has completed a $7.4 million funding led by Vertex Venture Capital joining existing investors. "The funds will enable the company to move from product qualification phase to mass manufacturing to accommodate the strong FTTH market demands in the U.S, Japan, Asia Pacific and recently Europe," said Moshe Price, CEO of ColorChip. Frost & Sullivan gave the company the Optoelectronic Components Emerging Company of the Year Award for 2006. 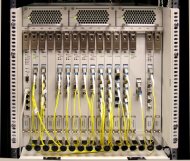 • OpVista has announced that its 2006 customer shipments showed 255% year-on-year growth, which it attributed to its OpVista2000 optical transport system (pictured, right). These products help network operators boost metro and regional network capacity to meet growing demand for high-bandwidth video, such as HDTV, and IP-based services. The company says that operators can quadruple the number of wavelength services and capacity by installing OpVista transceivers at each end of the network.

• Under the theme of Open Communications, Siemens Enterprise Communications (SEC) will be exhibiting at CeBIT 2007, Hannover, Germany, for the first time as a separate business unit. It will be showcasing products, solutions and services that enable open, network-independent, standards-based communication. SEC's demonstrations will include service-oriented architecture (SOA), unified communications, fixed/mobile convenience offerings, and innovative managed and hosted service strategies. Migration strategies that put the transition from traditional telephony to IP communication within every company's reach will also be on display, as well as mobility solutions that link fixed and mobile networks to raise productivity and speed up business processes.

• MRV Communications has announced that three of its solutions have completed testing by the [US Dept. of Defense's] Joint Interoperability Test Command (JITC), which certifies interoperability for all networking products to be used by DoD agencies. Approvals have been granted for MRV's Lambda Driver scalable wavelength division multiplexing system; Fiber Driver systems for services demarcation, WDM and media conversion; and its LX4000T, the latest in its series of console servers which delivers out-of-band networking, supporting serial services, power management and sensor management features.

• Alloptic, a developer of passive optical network technology, is to partner with Business Communications Service (BCS) to provide sales, design, implementation and support services for the Alloptic solution in the Gulf Cooperation Council (GCC / Middle East) region. BCS is a leading technology integration company based in Bahrain and focused on information and communications technology.

• Photonic solutions company Avanex has reported financial results for its second quarter 2007 ended Dec. 31, 2006. Net revenue in the Q2 07 was a record $55.6 million, a 9% increase over the prior quarter revenue of $50.9 million and a 54% increase over revenue of $36.1 million in Q2 06. "Our team generated solid revenue growth while significantly improving the financial performance of the company," said Jo Major, chairman, president and CEO.

• Adva Optical Networking has been named as a supplier of Ethernet last-mile access products in BT's 21st Century Network. Designed as one of the world's largest next-generation networks, it will deploy the Adva's FSP 150 as its network termination equipment. This will enable BT to deliver video, voice and data services across the last-mile with unparalleled flexibility, control and management, said Adva.

• QinetiQ, the international defence and security technology company, has announced the appointment of Clive Richardson as md of its EMEA and Australasian operations, with effect from 1 June 2007. He will be responsible for all of QinetiQ's operations except for QinetiQ North America and QinetiQ Ventures.

• The Automated Imaging Association (AIA) has announced its newly elected board of directors for 2007-2008 at its annual Business Conference in Orlando, Florida. John Merva, VP Sales & Marketing at CCS America was elected 2007 President. "We have two exciting initiatives for the next year: our international efforts are coming together with those of the European Machine Vision Association and the new Japan Industrial Imaging Association to create new global machine vision standards, which should help our members sell into global markets. Also, the AIA is investing in efforts to find new markets for machine vision technology."