Osram Opto Semiconductors has, with the latest version of its Ostar lighting technology, developed its first cold-white LED (module) to produce more than 1000 lm.

This means it is brighter than a 50 W halogen lamp, suiting the LED to a range of applications in the general lighting sector.

Osram says that samples of the LED will be produced over the next three months (to May 2007). Following that, a general market launch is planned for summer 2007.

The new LED is based on established components, which means that progress from the development stage to the production stage will be rapid, says Osram. The enormous increase in brightness is the result of major improvements to the overall system of chip and package.

The high-flux LED is equipped with six closely packed 1 mm2 high-power chips. The high chip packing density leads to the high luminance. What this means in practice is that a single Ostar lighting source with a 38° reflector is all that is required to illuminate a desk with more than 500 lx from a height of 2 m. 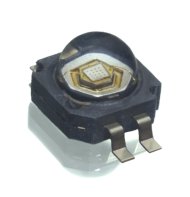 Osram adds that the Ostar is also setting "new standards in efficiency", producing 75 lm/W from an operating current of 350 mA. The LED was developed as part of the BMBF NanoLux programme.