Low-power, ultra-stable femtosecond laser pulses are ideal for generating nanocrystals with a narrow particle size distribution, say researchers in the US. What’s more, various structural forms, such as cubes and core-shell combinations, can be produced by ablating in the presence of different background gases (Appl. Phys. Lett. 90 044103).

"One of the big advantages of our technique is its simplicity," Yong Che of IMRA America told optics.org. "The nanoparticles are dispersed uniformly on the substrate without aggregation." According to Che, the technique is independent of the substrate material and no heating process is required. This means that nanoparticles can be deposited onto heat-sensitive substrates, such as glass, plastics and polymer films.

In this study the researchers decided to ablate nickel, which is an important material in the field of magnetic data storage. Che says that the technique can be extended to other targets and that the group is now investigating metal alloys and several dielectric samples.

Key to the process is a ytterbium-doped fiber laser (FCPA-µJewel) that emits 500 fs pulses with a central wavelength of 1 µm and a variable repetition rate of up to 200 kHz. The scientists found that they could suppress the formation of large (> 20 nm) droplet-like particles by limiting the laser fluence at the sample to below 1 J/cm2. This value is thought to correspond to the threshold of strong plasma formation. 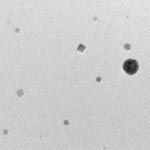 At first the researchers ablated their target in a vacuum, but it was the use of different background gases, such as argon and oxygen, that produced the most interesting results. "We achieved a core-shell (Ni–NiO) structure as intended," said Che. "But the NiO cubes were discovered by accident. "

High-resolution transmission electron microscopy conducted at the University of Michigan, US, revealed that the nanocubes were in fact single crystals of NiO. This was a surprise, because the team thought that the timescale of the ultrafast laser ablation would be too short for oxidation to occur.

The group plans to report additional results in the near future. Che says that IMRA is willing to collaborate with other researchers to help to broaden the range of applications.

James Tyrrell is News Editor of Optics & Laser Europe magazine and a contributor to optics.org.