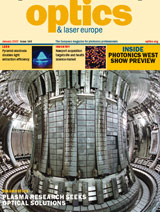 In 10 years, ITER will be a major experimental facility studying the feasibility of fusion power. Jacqueline Hewett visits JET – Europe’s flagship fusion experiment – to discover the crucial role that optical technologies are playing in the development of the new facility.

The exponential thirst for bandwidth has led the broadband industry to a fork in the road. Carriers can take the simplest road and see the steady, steep incline of the past level out for good, or take the fibre road and climb further to meet growing bandwidth demands.

The use of fluorescence measurement techniques is expanding rapidly, particularly in the life science and biotechnology sectors. Elaine Blackwood looks at what fluorescence lifetime has to offer compared with conventional measurement methods.

FTTH: Europe must open its eyes

With Japan racing ahead on FTTH build outs, Hartwig Tauber of the FTTH Council Europe outlines the deployment status in Europe todayand proposes some reasons for Europe's apparent ambivalence.

Newport's recent acquisition of Picarro's laser business could be worth up to $7 m in sales in 2007, and also fills a significant gap in its life and health sciences portfolio. James Tyrrell interviews Newport's CEO, Bob Deuster, to get an update on the company.

Scotland, UK, is home to a thriving optoelectronics sector. Nadya Anscombe talks to scientists in academia and local firms to find out the reasons behind the region's sustained success and new technologies that are in the pipeline.