The causal relationship between sunlight and skin cancer is well known. But the cause can become the treatment. A Scottish physics professor and dermatology consultant have developed a new way of treating skin cancers with "light bandages".

A new light-emitting bandage, which it is claimed will revolutionize the treatment of skin cancer, has been developed by scientists at the University of St Andrews and clinicians at Ninewells Hospital, Dundee (both Scotland). Having developed the concept, Professors Ifor Samuel and James Ferguson have established a new company, Lumicure, to commercialize their invention.

The device, which builds on established photodynamic therapy treatment (PDT) methods, not only reduces pain but also has the potential to be used by patients in their own homes. Ninewells has conducted a pilot clinical trial involving 12 patients with skin cancer.

The "optical bandage" has been used to treat several skin cancers: basal cell carcinoma, squamous cell carcinoma in situ (Bowens Disease) and actinic keratosis. Twelve patients with the above conditions were given two three-hour treatments. The patients were reviewed three months after the second treatment. The cancer had cleared completely in nine out of the twelve patients.

Professor Ferguson said, "This will have a major impact on the treatment of skin cancers. The light-emitting patch is a low-cost, portable and convenient method of treatment. Our initial pilot trials have already shown its effectiveness and we find patients requesting this treatment over conventional methods." 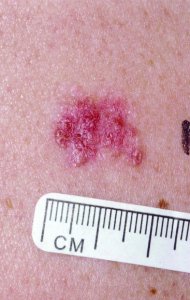 Existing treatments for pre-malignant and malignant skin disease are typically invasive or highly unpleasant, and can lead to secondary problems such as infections and scarring. Topical treatments are widely used and show good efficacy but show moderate to severe irritation for long periods of time.

When red light is shone onto this area a cell-destructive photoactive reaction occurs with high selectivity within the tumour, leaving surrounding healthy tissue untouched. PDT over the last 15 years has established itself as an effective treatment in 80% of selected basal cell and Bowen's disease skin lesions. 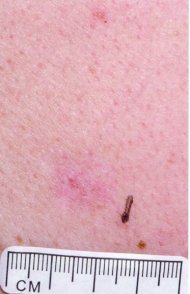 In addition, the developers believe there are exciting wider opportunities for the device in the cosmetic industry, including treating acne and anti-aging treatment.

The therapeutic breakthrough - a portable lightweight light source powered by a pocket-sized battery - is the brainchild of St Andrews' physicist Ifor Samuel, and dermatology consultant James Ferguson, head of the photobiology unit at Ninewells Hospital.

The pair teamed up in 2002 to combine their expertise in photo-physics and photodynamic therapy to create a new way of treating skin cancer. The result is this "light bandage" which contains its own light source and is so portable that patients can go about their daily business while under treatment.

The PDT light treatment then takes three hours, during which the patient is free to go about normal daily activities in this time. Finally at the end of this time, the patient removes the plaster and disposes of the device. 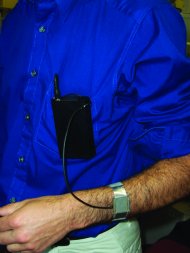 The light is generated by an organic light-emitting diode and is a spin-off of Samuel's work on advanced displays. The OLED is custom manufactured by Osram Opto Semiconductors for Lumicure. The source measures 25x25x1 mm and weighs 3 g. The light emitting area of this device is a circular area 20 mm in diameter.

The various parts of the device have been developed specifically for this application (and patent-protected by Lumicure). The battery is currently housed in a separate pack worn on the belt like an iPod and attached to the plaster by a cable.

The partners are currently working on a second device that will be a one-piece "sticking plaster" that will look and feel similar to current plasters used on cuts/grazes (Currently the light source is stuck to the patient using a specific medical adhesive). They are also working on new applications such as anti-acne treatments and other cosmetic applications.

Lumicure's light patches work at lower light levels than that of conventional PDT and therefore the phototoxic reaction occurs at a much lower pain level. The light patch is also significantly cheaper than the current laser light sources and is much less staff intensive. This will result in a significant saving to the NHS and a reduction in waiting lists for this type of treatment.

Skin cancer is a major and rapidly growing problem in the UK. It is estimated that around 10% of Scotland's population or 500,000 people will suffer from the disease at some point in their lifetimes. In addition to the treatment of skin cancers, the researchers believe that the technology could also be used in the cosmetic industry, for anti-aging treatments or for conditions such as acne.

The incidence of skin cancer is doubling every 10 years as the western population is increasingly living longer and the consequences of excessive previous sun exposure has had a longer period to take effect. By 2015 this would give Lumicure a total addressable market approaching $1 billion. (These are conservative estimates as it is generally accepted that skin cancer is vastly under reported).

Typically in the NHS, a conventional PDT treatment costs around £550 in total. Lumicure says its light emitting bandage will represent a significant saving on this figure.