• In 2005, the image sensor market continued its strong growth, spurred by the booming camera phone market, reports market research group In-Stat. Camera phones comprised over 70% of all digital cameras that shipped in 2005, and the vast majority of these devices used CMOS sensors, with the remainder using CCDs. Because of the strength of the camera phone market, overall area CMOS image sensor shipments exceeded area CCD shipments by nearly a factor of three in 2005. This gap will continue to widen through 2010. More information on the $3,495 report is available here.

• Asylum Research, a manufacturer of scanning probe/atomic force microscopes, has opened an East Coast sales, applications and support office at North Carolina State University. "Not only will it allow us to be closer to our East Coast customers," said Jason Cleveland, CEO, "but there is a lot of nanoscience work at both the university and at nearby Research Triangle Park." 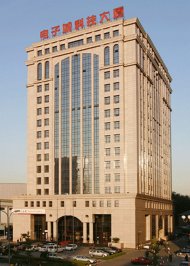 • Avantes has expanded its world-wide sales and service network with a new subsidiary: Avantes China in Beijing (pictured, right). This will enable the company to increase market penetration with its range of fiber optic spectroscopy equipment and better serve Chinese customers. Henry Zhang, formerly a distributor, becomes managing director of Avantes China.

• Tawee Tanbun-Ek, an expert in laser manufacturing, has become CTO at Fabrinet, which develops optical and electro-mechanical components. With 25 years' experience in the design, epitaxial growth and manufacturing of optoelectronic devices, he is set to introduce a new technology strategy for the company. He joins Fabrinet from laser diode specialist AdTech Optics.

• BAE Systems has completed its acquisition of National Sensor Systems. With the $8.7 million cash transaction, BAE Systems has added advanced competencies in its remote sensing, photonics and laser communications technologies.

• PerkinElmer has introduced three bio-imaging products to improve detection of disease indicators and speed discovery of effective new drugs. The Geliance, Spotlight 400 FT-IR and ATR imaging systems were announced at the Neuroscience 2006 show in Atlanta, Ga, US.

• Zygo has received its first order from a silicon wafer supplier for the Z3D-7200 multifunctional wafer metrology and inspection tool. The system will be deployed to support expansion of a 300 mm wafer fab. "We believe there could be a 10% growth in silicon wafer demand through 2009," said Robert Stoner, Zygo's VP Metrology. “The 300 mm segment is expected to grow to more than 30% of total silicon shipments in 2007."

• UK regional development agency Yorkshire Forward is investing more than £350,000 in Rofin Sinar UK to develop more economical and environmentally-friendly lasers at its site in Hull. Rofin Sinar will match fund the Yorkshire Forward research and development grant to develop a range of low powered carbon dioxide lasers that will be used to mark bar codes on packaging.

• The latest AlGaN-based ultraviolet LEDs made by Seoul Semiconductor are twice as bright and twice as reliable as the previous generation, claims the Korean company. At a drive current of 20 mA, the latest components have a maximum optical output power of 1.5 mW at 280 nm. Three months ago, Seoul and AlGaN epitaxy specialist Sensor Electronic Technology, US, signed an equity-based partnership to develop UV-LEDs. The devices have a number of potentially high-volume applications, chiefly surface decontamination and water purification, where they could replace mercury discharge lamps. SET's president Remis Gaska will be presenting the latest developments and application markets for ultraviolet LEDs at the Key Conference in November 2006.

• Laser chip developer Binoptics has appointed Norman Kwong as its new executive VP of business development. Kwong previously worked at JDSU, where he was director of advanced technology, and has also enjoyed stints at Ortel and Archcom Technology. Binoptics' lasers are made using a proprietary etched-facet process - the kind of innovation which Kwong believes will be important for developing low-cost, high-reliability, high-performance lasers.

• Hokkaido University spin-out company Laser Systems has developed a sapphire-dicing machine capable of making much narrower cuts in LED wafers than can be achieved using conventional lasers or diamond cutting systems. The Japanese company specializes in femtosecond-pulsed lasers. These pulses are so short that the material being cut does not heat up during the dicing process. According to nikkei.net, this results in a cutting width of just 5&microm, and increases the number of LED chips that can be yielded from a 2 inch wafer by up to 20% compared with a diamond tool. MH