With the aim of improving local support for its Laser MicroJet laser-assisted water cutting systems, the Swiss technology company has raised $8.1 million from fellow Swiss backers.

Synova, a Swiss developer of water jet guided lasers, has secured CHF 10 million (EURO 6.3 million) for the development of international micromaching centres. According to the firm, the new funds were put up largely by Swiss banks. 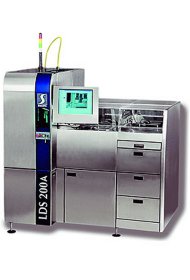 With more than 50 full-production machines at 30 different customer sites, the company says that it is committed to developing localized centers that support its Laser MicroJet systems.

The company believes that it will now be able to further penetrate the semiconductor wafer dicing market and make inroads into new applications by providing its services in closer proximity to its potential customer base.

"This funding comes at a pivotal time for Synova," said its CEO, Bernold Richerzhagen. "Our micromaching centres will allow us to serve the needs of our global customer base as we further penetrate not only the semiconductor market, but also burgeoning, precision-centric sectors such as print-head MEMS, hard disk drives and organic LEDs."

In July, the company announced that its first centre, serving the Silicon Valley area, CA, US, will open in January 2007. The firm plans to bring future sites on-line throughout 2007 and 2008.