Microstructured "holey" fiber could be ideal for tackling the looming bandwidth problems associated with electrical interconnects, according to a team from UK defense and security firm QinetiQ.

If Moore's law holds true and processing speeds continue to double every 18 months, designers will be forced to consider alternatives to copper that can cope with the increase in bandwidth. It has long been recognized that optical interconnects are the solution with their ability to handle substantial bandwidth increases over a far longer reach than copper. 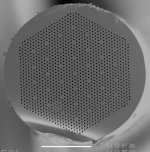 "Microstructured fiber technology is now so advanced that the features of the fiber can be determined to a very high degree of accuracy, often tens of nanometers," Terry Shepherd, leader of QinetiQ's microstructured materials team, told optics.org. "The beauty of this fiber is that its connections are so close together they can connect to terminals on a single chip. The technology we are developing is ideal for chip-to-chip interconnects."

Shepherd and colleagues have designed a fiber with 37 light-carrying cores to test their predictions. Fabricated by Danish firm Crystal Fibre A/S, the fiber was created by manually stacking 1261 silica canes.

"The fiber has a record number of cores and a record density of light-carrying cores (1150/mm2)," said Shepherd. "It has been designed so that each core is single mode at 850 nm and that the cores are sufficiently isolated from each other that you do not get substantial cross-talk between them. Each core represents a single channel of optical data and is spaced by 31.25 microns."

In a proof-of-principle experiment, the team butt-coupled its fiber to a linear array of four VCSELs, perfectly matching the fiber cores to the VCSEL array positions to highlight the properties of the fiber.

Taking things a step further, the team has designed a second fiber with a channel spacing of just 15 microns leading to a channel density of greater than 4000/mm2. The plan is to use a custom-designed 2D VCSEL and detector array in combination with the fiber.

"Our proof-of-principle demonstrator was about 1 MHz per channel," said Shepherd. "We would like to be able to get to 1 GB/s and when they are in use 10 GB/s per channel."

The QinetiQ team lists possible applications of this technology as local area networks, storage area networks, connections to backplanes and connections between electronic processors. It adds that the approach is suitable for use with either inhomogeneous systems, such as a mixture of silicon and III-V technology, or with all-silicon photonic/electronic systems.