As Laser Zentrum Hannover blows out the candles on its 20th birthday cake, optics.org interviews managing director Andreas Ostendorf about the centre's crowning achievements and what he believes the future holds for the laser.

This month (June) Laser Zentrum Hannover (LZH) and its 210-strong team are celebrating the centre's 20th anniversary in the purpose-built premises in the city's Marienwerder Science Park.

Nowadays, the institute is world renowned in the field of laser technology. But back in the summer of 1986, the then 25 employees commenced working in relative anonymity at several locations around Hanover.

"At the time of the launch, three technical institutes at the University of Hanover decided to combine their laser activities into one research organization forming LZH," recalls Michael Botts, the centre's public relations manager.

"In the beginning we were distributed at four sites around the university, although not actually a part of it. In 1991, we relocated to our present site on the outskirts of the city. Supported by the state of Lower Saxony, we have grown our research turnover to more than 10 million euro."

As a research centre, LZH is a non-profit-making organisation. Of LZH's €11.4 million turnover in 2005, 34% came from industry; 12% from the EU; 27% from the German government's Ministry for Research & Development; 14% from other German research societies; and 13% from the local State of Lower Saxony.

The centre also acts as an incubator to some 20 companies. As it only performs R&D work and not production, many of its start-ups take on commercial production roles. At this year's Hanover Fair, LZH received a joint prize with its offshoot Micreon for the latter's successful start-up. Micreon now develops and manufactures femtosecond laser systems. Some other offshoots also started as house job-shops and remained on site until they could move to other premises.

Optics.org interviews LZH director Andreas Ostendorf about the evolution of the centre, its major achievements over the past 20 years and where he sees this dynamic sector heading. 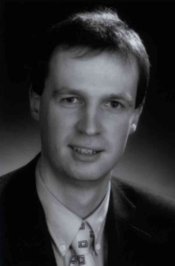 optics.org: How does a LZH research and technology transfer project begin?

Andreas Ostendorf: Industrial companies often come directly to us. They may have a problem with cutting or welding, for example. Also, various scientists spend a lot of time writing project proposals for other publicly-funded research projects.

There is also further funding available for international projects and LZH undertakes these with various international partners, such as the Welding Institute (TWI) in the UK. We also have contracts with the automotive industry, of which there are several big manufacturers in Lower Saxony, including VW, MAN, Airbus and Alstom.

o.o: How do you rate the position of LZH in the pantheon of international research centres?

AO: LZH is involved in a wide range of activities from industrial solutions to pure science - such as a project to measure gravity waves. We believe that in Germany we are in second position in terms of size and number of projects after the Aachen Fraunhofer Institute.

o.o: What have been some of the key achievements of LZH over the past 20 years?

AO: One advantage of our structure at LZH is that we have both the R&D projects and the ability to develop original laser solutions in house. Therefore we can tailor the solution to a particular application.

A good general example of the progress our research has supported is that many of the functions in a typical laser job shop of today started life as LZH research projects 15 years ago. 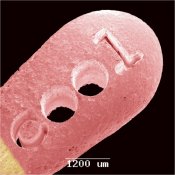 LZH was instrumental in the development of the femtosecond laser, which is now a significant part of the global laser scene. Some of our specialist capabilities include nano-ablation and the precise cutting of semiconductor materials.

Then there is the diode pumped solid state laser, which we started to develop about 15 years ago. Some of our critical developments were to identify the optimal rod and pump geometry and solve the thermal management problems.

We also started the development of the fibre laser. Fibre laser pioneer Andreas Tünnermann who is now a professor and director of Jena's Fraunhofer Institute of Applied Optics and Precision Engineering, started his career at LZH.

In the past five years we have been working on ultra short pulse fibre lasers and oscillators. Another of our main activities in recent years has been in the field of femtosecond lasers, including the femtosecond LASIK technique for refractive eye surgery. [LASIK stands for Laser-Assisted In Situ Keratomileusis and is a procedure that permanently changes the shape of the cornea, using an excimer laser.]

Another important area for us is the use of femtosecond lasers in micro- and nanometric machining which has also been pioneered at LZH. Many of the SEM photographs comparing nanosecond and femtosecond pulse ablation that were originally performed at LZH over the past 10 years are still cited today.

o.o: Which areas of laser technology does LZH focus on?

The state where we are located, Lower Saxony, has many transport manufacturing activities such as VW, Airbus, MAN and Alstom. These manufacturers are all interested in making lighter weight metal components and products, so LZH is involved in weight reduction research. We also have many applications in remote welding.

Our nanotechnology work is at the convergence of optics, photonics and electronics. The electronics industry is reaching its limits in terms of thermal barriers and the transfer rates of information so we are helping industry look for ways around these bottlenecks.

We believe that plasmons can be used to carry information over a microelectronics structure. The information may be carried more quickly in plasmons at an interface between a metal and a dielectric.

These need to be designed and structured using lasers to allow smaller devices, but this is really a project for the future. Applications could be higher speed communications. A diode laser is also the source for the carrier in this project.

We are putting a lot of R&D work into nano-surgery to make changes inside a living cell. We can alter parts of the intercellular plasma and modify genes. And we can directly use the same tool to observe the results by laser microscopy.

For example, if you cut some fibres in a cell you can tell how viruses can travel from the membrane to the core. In this application we are using multi-photon sources and femtosecond lasers that we have developed in house.

o.o: What do you see as the future for the laser? 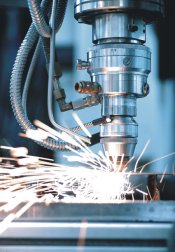 AO: I think that in the future we will observe that lasers will become more compact and more efficient and that they will find ever more applications. For example, if one considers high power lasers, for example, they are currently large, complex and expensive but I believe we will see greater integration and both size and cost reduction. There will certainly be more applications in industry, medicine and in consumer products.

o.o: What are your plans for the development of LZH?

AO: At 210 people, we are almost at our size limit although we may see a little expansion. What is more interesting is our growing cooperation with international partners, especially in Eastern Europe and Asia. I am currently forming networks in China and Russia to make better use of the R&D capacity there.

In the past year, LZH has opened a facility in Moscow in cooperation with Trumpf and Kuka Robots and in partnership with the Russian Laser Association.

In China we have started two education centres. One is in partnership with German engineering company Thyssen and located at the University of Science and Technology in Changchun. The other is a partnership with Trumpf and at Tongji University in Shanghai. Both projects are supported by the German government's Federal Ministry for Research and Education.

o.o: How does LZH compare with other laser research institutes?

AO: LZH has since its foundation 20 years ago been multidisciplinary, which is a unique approach. Many other centres have focused on specific sectors or applications and only recently have some started to follow our research model. Our researchers are quite used to thinking about the whole picture ranging from lasers, optics, system development to uses in industry and medicine and other applications. I believe that this broad approach is the most important factor in our success.

Dr Ostendorf studied electrical engineering at the University of Hanover, receiving his Master's in 1994. In 1995 he started working at LZH in the area of production systems, becoming head of that department in 1997. He continued to work in the areas of laser microtechnology, UV and excimer lasers, then later in femtosecond lasers. In 2000 he became LZH's CEO and in 2002 its managing director.